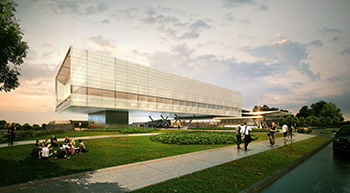 STORRS, Conn. — Construction began on Oct. 14 for the University of Connecticut’s (UConn) new technology park, which will foster public-private research partnerships and advance the university as a leader in innovation.

The $183.5 million project will be funded by a combination of state and federal funding. The State Bond Commission approved $131.5 million to construct the first building in the technology park, according to Hartford Business, but companies involved in the public-private research partnerships also agreed to pledge at least $60 million in financial backing. At the groundbreaking ceremony, UConn also announced anchor partners — Eversource Energy, General Electric, United Technologies Corp., Pratt & Whitney Co., Fraunhofer USA, Comcast and FEI Co. — which will operate research facilities within the complex.

The technology park will feature an inaugural 113,000-square-foot, multi-level facility known as the Innovation Partnership Building or IPB. Designed by New York-based Skidmore, Owings & Merrill LLP, the building will feature large laboratories and about $40 million worth of specialized equipment. It will serve as a gathering spot for academic researchers, private industry scientists and business entrepreneurs to work collaboratively and develop new technologies in energy, electronics, materials science, additive manufacturing, microscopy, cyber security and other technology fields.

While the state’s investment in the technology park supports the university’s science, technology, engineering and math (STEM) programs, the park is also anticipated to create jobs and long-term economic growth in the state. In recent years, UConn has seen research grants double, and the university currently manages $250 million in research activity for the state, according to UConn Today.

“UConn has a proud history of supporting the state’s economy through groundbreaking research, academic excellence and strong industry-university partnerships,” UConn Provost Mun Choi told UConn Today. “This technology park provides the intellectual and physical assets to support the development of groundbreaking new technologies that will define our future.”

In September, Chris Dimou, president and CEO of Roto Frank of America Inc., a Chester, Conn.-based manufacturer of window and door hardware, met with UConn officials and Larry McHugh, president of the Middlesex County Chamber of Commerce to discuss ideas to promote workforce development, technical support for manufacturing and identifying emerging technologies and capabilities.

UConn is a leading institution for additive manufacturing, a process in which digital 3D design data is used to build up a component in layers by depositing a range of different metals, plastics and composite materials. A partnership with UConn would allow original equipment manufacturers, such as Roto Frank of America Inc., and their suppliers to pursue faster prototyping and the integration of more advanced materials in their products.

Construction of IPB is expected for completion in 2017; however, additional buildings are already slated for construction in the tech park over the next 10 years and will eventually cover 900,000 square feet, reported The Daily Campus.

The technology park is part of a 10-year, $1.5 billion initiative, Next Generation Connecticut, which will help transform UConn, the state’s flagship public university. A new 212,000-square-foot STEM Residence Hall will house hundreds of STEM Scholars who are members of the STEM community within UConn’s undergraduate Honors Program. Construction on the $105 million facility began in November 2014 and will continue through fall 2016. Construction on a 115,000-square-foot, high-performance building and laboratory for interdisciplinary research began in June 2015, with completion scheduled for summer 2017. The $95 million facility will accommodate student and faculty growth in fields such as bio-nano engineering and cyber-physical systems engineering.