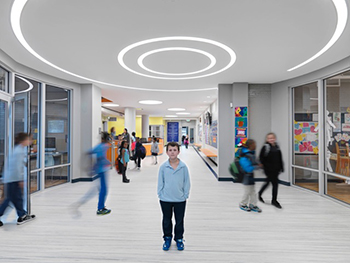 BOSTON — Last fall, Boys & Girls Clubs of Boston and the South Boston community celebrated the re-opening of the Edgerley Family South Boston Club after a complete gut renovation of the original 1940s structure. The club’s goal is to provide children with the sufficient support and opportunity to learn and succeed academically as well as introduce them to visual, performing and music arts to help develop their individual creativity.

The 40,000-square-foot facility underwent a yearlong renovation that began in July 2014 in order to meet the growing needs of its members. Not only did the renovation add a state-of-the-art music clubhouse and commercial-quality kitchen, but it also created a new, fully accessible front entrance, stair and elevator in order to meet the club’s inclusivity goals. Chelsea, Mass.-based The Architectural Team Inc., helped transform the space.

Interior programmatic spaces were redesigned to focus on serving the youth, pre-teen and teen member groups. The youth areas on the second floor include a reading room, educational space and game-room lounge with a central circulation area. Although not directly connected, the pre-teen area located on the ground floor is situated in close proximity to the teen center to create a synergistic atmosphere, intended to inspire the younger members to remain engaged and actively participate in the program.

Shared program areas include the pool, auditorium, dining room, music room, art room with floor-to-ceiling windows, computer lab and gymnasium. All of these, except for the pool, are located on the first floor to allow for maximum supervision and safety. Visibility was enhanced throughout the building by adding full glazing on doors and by using colorful storefront glass between hallways and program areas.

The acoustically soundproof music clubhouse features a state-of-the-art recording booth and practice rooms, allowing for more members to get involved in vocal development, instrument lessons and music theory training. The space can also be used for collaborative performance and is large enough to host CD-release parties, Open Mic nights and performances.

The new computer lab accommodates up to 25 students, alongside an adjacent graphics design space. Soothing purple and yellow hues define the educational spaces, while the more energetic and active spaces such as the music room are accented in orange.