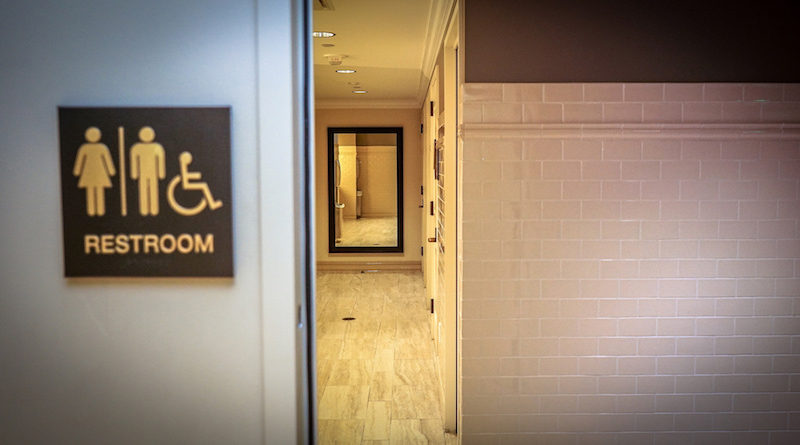 At the intersection of school restroom policies and design: A gender neutral restroom in San Francisco. Photo Credit: Ted Eytan

For decades, the school restroom was mythologized in popular culture as an ersatz meeting place or den of low-end inequity — consider the Fonz entreating his male interlocutors to “step into my office” or Mötley Crüe’s cover of “Smokin’ in the Boy’s Room.” These days, the school restroom is also terra incognita when it comes to challenges facing transgender students and the socio-political debate that surrounds them.

The issue became particularly divisive in April 2016 when, under President Barack Obama, the Department of Education pressed a handful of contentious school districts to permit transgender students the use of bathrooms of the gender with which they identify. In February of this year, President Donald Trump’s appointees, Education Secretary Betsy DeVos and Attorney General Jeff Sessions, revoked the previous administration’s guidance, which leaves the needs of transgender students in the hands of school districts.

“Most students who identify as transgender have to use the restroom in the nurse’s office or a faculty bathroom. Most schools don’t have the infrastructure or budget to add additional bathrooms,” said Andrea Bazemore, creator of “The Black Apple,” a podcast for educators committed to bringing social justice practices in their classrooms.

Currently, when transgender students face intolerance in regard to using restrooms of their stated gender, the students either have to seek out a rare unisex restroom or find alternative arrangements within the school.

“The problem happens when you have staff that don’t approve of the student’s gender identity and won’t allow a student to use the restroom due to them being transgender. Many students’ fears about bathroom issues include adults’ attitudes toward them,” Bazemore added.

There are an estimated 150,000 transgender students across the nation, according to a report published in February by the Williams Institute at the University of California Los Angeles School of Law. Among them is Drew Adams, a transgender high school junior at Allen D. Nease High School in Ponte Vedra, Fla., who was prohibited from using the boys’ bathrooms after someone made an anonymous complaint.

His mother, Erica Kasper, filed a complaint on his behalf with the Department of Education’s Office for Civil Rights after a resolution could not be reached with the local school officials. The complaint was nullified when the Trump administration rescinded the Obama-era guidelines, so in June, Adams sued school officials and the St. Johns County School Board. The suit was filed with the U.S. District Court for the Middle District of Florida, and alleges a violation of Title IX, a federal law that bars sex discrimination in public schools.

Adams’ suit is just one of a throng of cases being pursued across the country. The nation’s leading civil rights organizations released a letter on July 18, 2017, that contends that schools must allow students access to restrooms aligned with their stated gender identity lest they willfully violate federal law and the Constitution. Moreover, suits like Adams’, if successful, could result in hefty settlements.

To allay these possibilities and forthrightly address the needs of their students — no matter their gender identity — some schools are opting to take measures today rather than tomorrow.

Yonkers, N.Y.-based ASI Group, a 50-year-old manufacturer of washroom accessories, partitions and lockers has seen an uptick in school orders for what it terms “ultimate privacy partitions.” These are partitions that are lower to the floor and higher to the ceiling than conventional restroom partitions. A European-style partition, essentially a small room that encloses the facilities, has also proven popular.

“We are also getting more and more requests by school districts for [these partitions] even though there isn’t legislation in place in most, if any, places,” said Cyrus Boatwalla, head of global marketing at ASI Group. “School districts are recognizing that it may come down the pike or they want to be more proactive in that area.”

Another means of navigating real-world needs of school restrooms comes from the virtual world. Concept3D, a digital mapping company with offices in Colorado and Minnesota, created the CampusBird, an interactive map and virtual tour platform. When implemented by a learning institution and used on a mobile device, it enables transgender students and others to find gender-neutral bathrooms (and a bevy of other resources) without risking the confrontation that might result when asking a stranger.

“It’s a way to put those resources at the fingertips of students when they need them,” said Concept3D Marketing Manager Samantha Slater.

Colleges across the nation, including Colorado State University, Harvey Mudd College and the University of California, Irvine, among others, have embraced the platform to help students find everything from meditation and lactation spaces to gender-neutral bathrooms.

“If it’s not something you face everyday, you may not know how to answer. Also, a stranger may not react in a great way or simply may not know where every gender-neutral bathroom is on campus,” said Slater.

Of course, these solutions cost money — a resource often in short supply to cash-strapped public schools. Boatwalla, however, thinks the human cost of not implementing such measures should also be considered.

Read the entire article in the July/August issue of School Construction News.