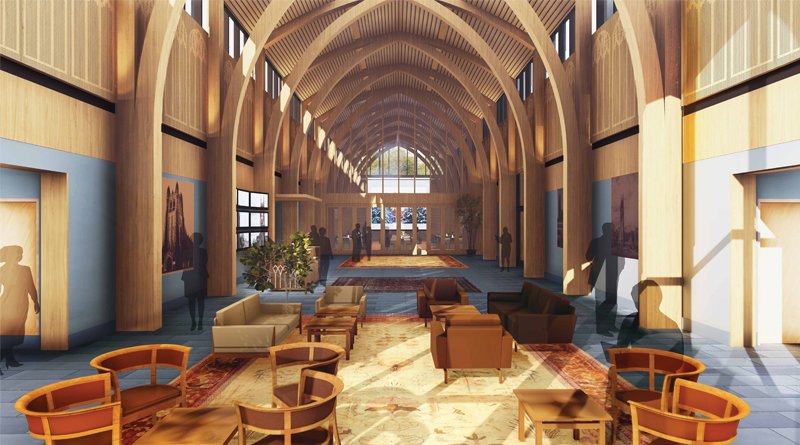 DURHAM, N.C. — Duke University in Durham began construction on July 31 on the campus’ new Karsh Alumni and Visitors Center. The center will include event and office space for the Duke Alumni Association as well as a small meeting pavilion wing and visitor center.

Designed to be the first campus stop for returning alumni, prospective students and visitors, the new center will offer amenities such as a coffee bar. Utility installation across the site began in late spring and continued throughout the summer as the first stage of the project. The rest of the project will be completed in phases over a period of two years, with a projected completion in summer 2019.

The Karsh Alumni and Visitors Center was designed by Centerbrook Architects & Planners in Centerbrook, Conn., with locally based LeChase as the construction manager on the project. The 47,000-square-foot project totals nearly 47,000 square feet of combined new construction and renovations, with two new buildings being constructed and a third being renovated. The largest building of the project will be the 20,200-square-foot events building with a grand dining and presentation hall, exhibits and lounges, a café and visitor support services. The second newly constructed building will be a 16,900-square-foot, two-story office designed for staff who support Duke’s alumni and development activities. The existing 7,400-square-foot Forlines House is the third aspect of this project, which will be undergoing renovations.

The three buildings are organized around a large outdoor courtyard that is designed so that a tent can be used for outdoor events, according to Mark Simon, FAIA, principal at Centerbrook Architects. The center will have a capacity of up to 600 people between the conference center and tented space for high-visitation periods such as alumni reunion week or for special-interest events. With multiple rooms in a variety of sizes in Forlines House and in the new office buildings, additional meeting spaces will be available for events with special interests that wish to break into smaller groups or lectures. Additionally, the events center has a grassy front that faces the street, designed so that people can see a “warm, glowing presence” at night that invites people in, according to Simon.

In addition to welcoming visitors, the goal of building the new center is to be able to comfortably handle different-sized groups depending on the occasion, which was a major design challenge, according to Simon. “While we wanted the center to have the capacity for larger populations, we didn’t want it to feel like a big convention center either,” said Simon. “We also wanted it to be warm and welcoming for smaller groups. The way we have broken the spaces up successfully achieves our goal — small groups won’t feel like they are lost, and large groups can be accommodated.”

The function and the particular flexibility of this new construction is unique, according to Simon. “The way the school operates and the type of events they have is unique. Duke alumni are very devoted to their school, and the alumni association is a robust organization. Having a place like this on campus is not common amongst other universities, so it’s a step forward in college alumni relations,” said Simon.

The architectural style of the new center is considered “gothic revival,” designed to match the “very strong and well-known ‘gothic character’ of Duke’s existing campus,” according to Simon. The shape of the building has recollections of gothic while overall still being a modern building, but is not an absolute reproduction of medieval gothic, said Simon. Consistent with this theme, the events center has a modern glassy core, with a shallow curved gable roof straight out of gothic revival, according to Simon. The base of some of the new event buildings will be constructed out of what is known as Duke Stone, a particular stone that is quarried near the campus and is used for most of the campus buildings with the intention of keeping the new construction consistent with the surrounding buildings.