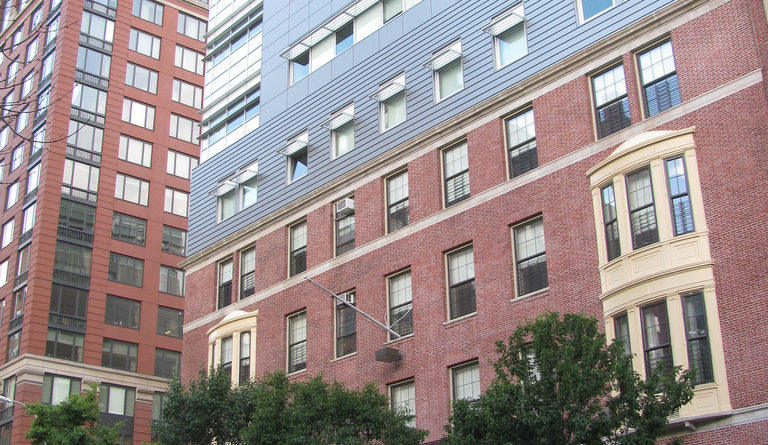 The Chapin School at East 82nd Street and East End Avenue has angered neighbors with its recent construction. Photo by Janine and Jim Eden.

NEW YORK — For a few blocks on the Upper East Side of Manhattan, two types of classes are clashing. First, there’s the Chapin School and the Brearley School (both are all-girls K-12 private schools), and then, there are the middle-class residents of the neighborhood, who are complaining about recent construction at the learning institutions.

The complaints of the Yorkville neighborhood residents range from the use of tax breaks to complete the work on the private schools to the reek of portable toilets used by construction crews. Many of the locals expressed upset over the fact that taxpayer money is being used on a project that benefits only the daughters of New York’s elite (alumnae of the Chapin School include first daughter Ivanka Trump). Tuition to the schools is more than $45,000 per year.

“It’s a privileged entity that offers nothing to the community,” resident Lisa Paule told the New York Post. Paule has lived near the Chapin School for almost 10 years and co-founded a group, Serene Green 84, as a means of protesting the project. “The city needs to be responsible to residents, not to developers.”

Paule and her group aren’t the only entity taking note of the issues from the construction projects. New York State Comptroller Thomas DiNapoli said the Chapin School project has accrued the highest number of noise complaints of any city construction site from January 2014 to June 2016.

The nearby Brearley School on East 83rd Street and East End Avenue (whose alumnae includes at least one Kennedy and a notable actress or two) is in the midst of building a second campus, which neighbors fear is adversely affecting local businesses. Scaffolding and is obscuring area storefronts, including a popular wine shop, which employees contend has experienced a drop in business. Moreover, neighbors are concerned about  the potential dangers of a crane that’s being erected to build the structure’s upper floors and a gymnasium.

As for tax dollars benefitting private institutions, NYC has long offered assistance to nonprofits via tax breaks to investors who loan money to the projects (both the schools are registered nonprofit educational organizations). To wit, the Chapin School project received an estimated $1.9 million in tax breaks, followed by the Brearley School, which received about $1.2 million.