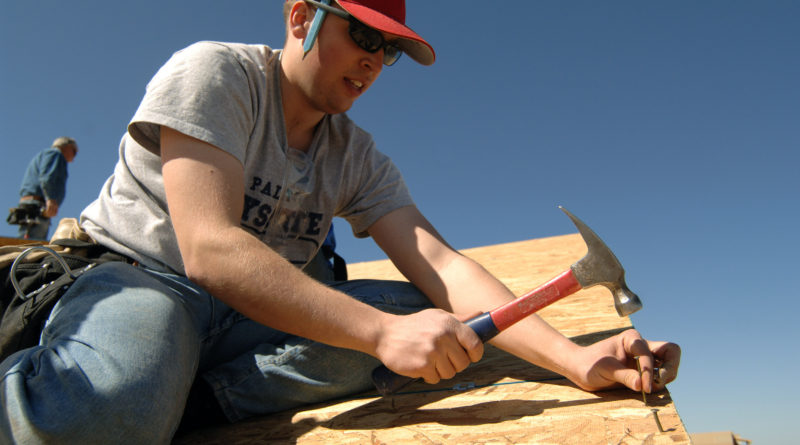 Nate Moeller works on the roof of a Habitat for Humanity home. Photo courtesy of John Van Winkle/U.S. Air Force.

CADILLAC, Mich. — Across the nation, construction companies are decrying the relative dearth of skilled labor to fill their ranks. Fortunately, secondary school programs throughout the country are addressing the need with aggressive training programs that students love.

During the economic recession that began in 2007, thousands of career-long construction workers exited the field due to frozen projects and diminished opportunities. An estimated 60,000 workers left the industry from 2000 to 2009, representing nearly 43 percent of the workforce then-laboring in residential construction.

Now, thanks to economic recovery as well as opportunities resulting from the recent spate natural disasters, there is a shortage of viable labor in the construction market. Programs provided by institutions like northern Michigan’s Wexford-Missaukee Career Technical Center (WMCTC), however, are not only addressing an industry’s need, they’re also empowering high school students with career options that may not have originally been on their collective radar.

Each year the WMCTC serves approximately 675 juniors, seniors and adult students from seven public school districts and two parochial schools within the Wexford-Missaukee Intermediate School District (WMISD). Students are introduced to a variety of hands-on training programs with an eye to ready them for honing their new skills in college, employment or military settings. Among the most popular options is the Applied Construction Technology program, which helps students gain real-world construction experience at a time when market demand for their skills is experiencing staggering growth.

In June 2017, the Bureau of Labor Statistics reported that there were 225,000 open construction jobs in the U.S. — up 31 percent from the preceding year. As a consequence, programs like those at the WMCTC have seen an uptick in enrollment. Brad VanBuren, WMCTC’s tech center programs instructor, told local newspaper, the Cadillac News, that 50-70 percent of students who enter the program intend to pursue a career in a trade. This bodes well for firms seeking skilled workers or at least those who have developed enough of a professional background to acquire necessary skills on the job.

“If they can get a young student who’s eager to learn, they’d rather take them in with very little experience out of our program and groom them the way they want them taught,” VanBuren said in the report. “They’re already short on workers and now it’s going to be worse.”

Indeed, the lack of skilled construction labor is particularly worrisome given the devastation wrought by hurricanes in states like Texas and Florida that now face years of rebuilding homes, businesses and schools. Here again, students are coming to the rescue. Jim Luckow, an instructor at the Pima JTED Star Campus in Tucson, Ariz., will lead a team of 10 students to Houston during their fall break to apply skills learned in his construction class to the rebuilding efforts.

“We learn construction, we have skill sets that we are trying to sharpen. And what a great opportunity to be able to demonstrate and show the skills we have,” Luckow said to Arizona Public Media.

More to the point, Luckow suggested his students may learn another valuable lesson to add to their estimable skill sets: “But more importantly, the bigger picture is what a great opportunity to share and help people you don’t know.”