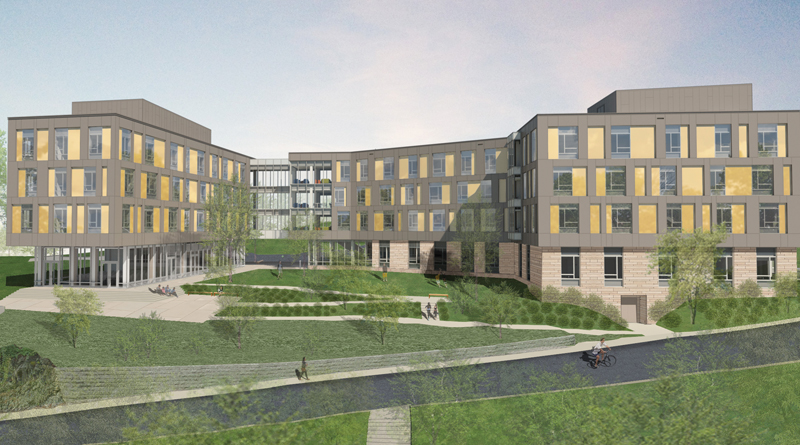 The new residence hall will replace the current student housing on the site, and will provide full accessibility and modern energy efficiency.

WALTHAM, Mass. — Brandeis University in Waltham had a topping-off ceremony for its new residence hall on Oct. 16, 2017,. The ceremony marked the new building’s last steel beam raised, and was attended by the Brandeis University community, the project team and design partners.

The celebration included Medford, Mass.-based BOND Brothers Inc., a building, civil, utility and energy construction firm, and Boston-based architecture firm William Rawn Associates, the building’s designer. BOND is providing preconstruction and construction management services for the new 53,000-square-foot building. The team was tasked to deliver an environmentally friendly building that can house 164 students and provide common function space for the campus community as a whole.

“BOND is honored to partner with Brandeis University and the project team to build this new residence hall, an essential part of the campus,” said Robert Murray, BOND’s president. “This is a phenomenal project, which incorporates sustainability and modern design. We are excited to deliver upon the vision of this new facility which reflects the university’s commitment to academic excellence and innovation.”

The project will be financed with bonds, with an estimated total budget of $30 million. Site preparation began in June 2017, with demolition of portions of the previous building occurring in May. The project is on track, within budget and slated for completion in August 2018.

The schedule on the project is aggressive for a ground-up construction project of this size, according to Brendan O’Malley, project manager at BOND. “The site is relatively small and located on the main campus loop road,” said O’Malley. “Coordinating timely deliveries of material and ensuring multiple trades are working efficiently is critical to the project’s success.”

The new residence hall will replace the current student housing on the site, and will provide full accessibility and modern energy efficiency. With 164 beds, the new residence hall allows for 60 more beds than the previous housing, helping Brandeis to achieve its goal of housing more students on campus. The dorms will be a combination of double and single rooms over four floors. The building will include elevators, an open and inviting main stairway and easier movement between floors.

The building consists of two wings connected on the second, third and fourth floors by a bridge enclosed by a curtain wall. The student residence areas feature commons rooms, study lounges and a communal kitchen. The first floor of the southern wing — referred to as the Upper Campus Commons — will feature a kitchen, an assembly space and a multipurpose room that will serve all members of the campus community.

The building exterior consists of limestone, curtain wall, metal panel and a spandrel glass rain-screen system. The design of an ornamental stair and railing adjacent to a multistory curtain wall will create a unique aesthetic from both within and outside of the building. In addition, a large courtyard will attract students from adjacent residence halls and will serve as a new gateway to the Upper Campus.

The new residence aims to meet student concerns in regard to needing more amenities in campus housing. The inclusion of dedicated study rooms and ample common spaces for gatherings and events were also a response to student requests. The new Upper Campus common space consists of a large common room seating up to 100 students, a smaller studio room for multi-use and a large kitchen area.

The study spaces will include four dedicated study rooms for eight to 10 students each in addition to six individual study or reading nooks throughout the building. There will also be “hangout” spaces, including four common area lounges with seating for eight to 12 each. In addition, there will be A/V and acoustic equipment, and storage to support performances and lectures.

The famed Chum’s Coffee House — which is located within the adjoining Usen Castle — was renovated this summer and opened early in time for the fall 2017 semester.

“This will be the first building on campus that utilizes geothermal,” said O’Malley. “Typically, these geothermal systems are used for heating, cooling or hot water. The geothermal well field on this project provides all three.”

Check out the entire article in the November/December issue of School Construction News.