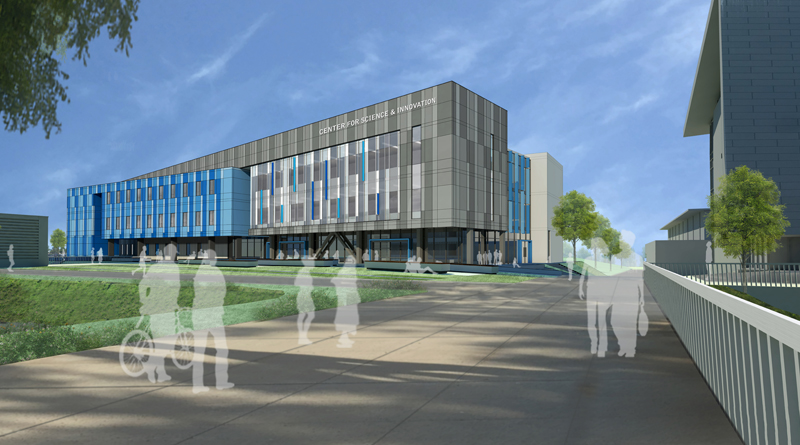 CARSON, Calif. — As subtle as it may be, there’s a profound difference between A. Quincy Jones and the Quincy Jones. Though both made their names producing creative work in ’60s-era Los Angeles, the latter is a music producer who worked with the likes of Michael Jackson, and the former is an architect known for, among other ventures, the original design of California State University Dominguez Hills (CSUDH). One of these talented fellows recently had a “fab lab” integrated into their oeuvre, and here’s a hint — it’s not going to win a Grammy.

The new Toyota Center Fab Lab at CSUDH, however, might still win awards despite being theoretically undanceable. Thanks to the efforts of the Los Angeles office of HGA Architects and Engineers (HGA), a new three-story, 91,000-square-foot on-campus Science and Innovation building broke ground in September 2017.

The $82 million facility comprises CSUDH’s physics, biology and chemistry programs as well as  a third-floor roof terrace and a first-floor makerspace fabrication laboratory (aka “Fab Lab”) made possible by a $4 million gift from the Toyota USA Foundation.

“A facility of this quality and potential will significantly elevate our university’s standing as a comprehensive and inclusive teaching and research institution, while our faculty, students, and the teachers and young learners in our partner schools reap the benefits of all it has to offer,” said CSUDH President Willie J. Hagan in a statement.

Moreover, the impact of the facility is intended to radiate beyond the confines of the campus and bring the spirit of innovation into the surrounding community of Carson, Calif., a suburb in Los Angeles County about 13 miles from Los Angeles’ downtown. Carson is where gansta rap pioneer Dr. Dre spent his middle school years and a See’s Candy factory is among the top employers. The coming Toyota Center for Innovation in STEM Education, as it will be known, could also become a wellspring of new opportunities for the community-at-large.

“One of HGA’s primary objectives for this project was to design a facility maximized to the best use for its wide variety of users. In this case, not only did we design a facility, which will fully serve the departments it will soon house, but we also created a space that will enhance the learning process in STEM education by serving local K-12 teachers to further their expertise and training, in addition to being available to the broader community,” said James Matson, vice president at HGA.

The college concurs. As President Hagan said, “With Toyota’s generous gift, and HGA’s beautiful and highly-functional design, this ultra-modern instructional and research facility will pay dividends to our local communities and industries for generations to come.”

The project was not without its challenges, however. Among them was fitting the footprint of the Science and Innovation building into an awkwardly long, narrow site. To fit the building into the available space whilst creating the types of spaces necessary to promote collaboration amongst students, a skewed level design was implemented wherein the second floor and terrace rest at a slight angle on the first floor. There was also the existing campus aesthetic established by A. Quincy Jones in which the new facility needed to integrate. Jones was a beloved figure on campus, where he remained Master Architect up to his death in 1979. The university was established in the wake of the Watts Riots by Gov. Pat Brown, who “decided that a university was needed that catered to the poor, disaffected minorities in those communities,” wrote architecture photographer Darren Bradley on his blog Modernist Architecture.

But the project almost didn’t happen when, in 1966, Governor-Elect Ronald Reagan froze funding for state colleges. “The school was saved by a last-minute budget compromise in the legislature, and construction began in earnest on the new Dominguez Hills location,” wrote Bradley.

To honor Jones’ legacy, the team, led by Satoshi Teshima, associate vice president and senior designer at HGA, found an innovative way to integrate the new with the old and strike balance between the two.

“The new Science and Innovation building is placed directly adjacent to the existing Natural Sciences and Mathematics Building, which is to be renovated in the next construction phase to create a highly prominent science hub and presence in the very heart of the CSUDH campus. This strengthens the current masterplan, which is closely tied to the historic outline of Quincy Jones’ original campus plan, in which clear academic and administrative zones along major pedestrian spines are established,” said Teshima. “The new Science and Innovation building not only emphasizes the overall campus organization and improves wayfinding, but it also creates a gateway, in conjunction with the library expansion, along the main North-South axis as the two tallest buildings on campus.”

To read the entire article, check out the November/December issue of School Construction News.