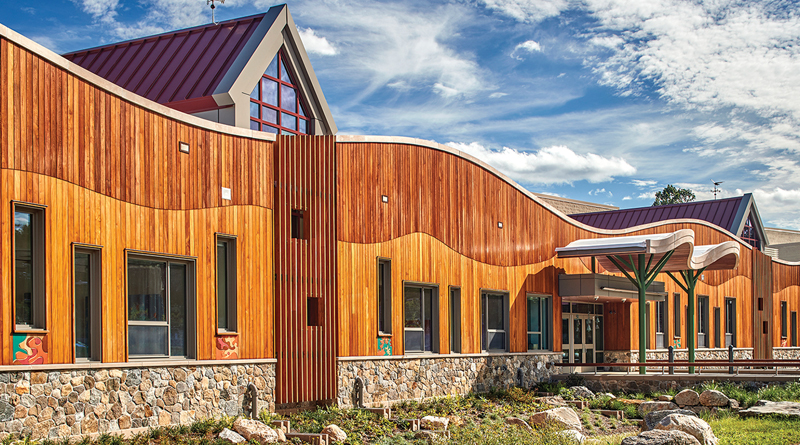 When discussing the tragedy of Sandy Hook Elementary School in Newtown, Conn., numbers are a refuge. They’re devoid of emotion, flatten facts and — at the risk of sounding glib — numbers are “numb.” On the 12th month of 2012, a single gunman fatally shot 20 children and six adult staffers — a massacre bookended by the murder of his mother and his own suicide.

Six years later, the numbers tell a different story about the site, and though they will never and should never eclipse what occurred there, they point to a future that is inherently safer and hopefully happier.

Debuted in time for the 2016-17 school year, the new, 86,800-square-foot Sandy Hook Elementary School accommodates about 450 students from kindergarten through fourth grade. It was two years in the making, following an intensive process on the part of stakeholders, including Svigals + Partners, the New Haven, Conn., firm that designed the new facility under the direction of Managing Partner Jay Brotman, AIA.

“We recognized immediately the importance of an inclusive and open design process,” said Brotman. “Before even the first drawing, we met with community officials and families to hear their concerns, to listen to what they wanted from a new school, to discover what was important to the people there about their town and to hear from them what the original elementary school meant to them.”

In the end, Brotman said his team became intimately involved with the people of Newton and as a consequence, “became very protective of them.”

From the get-go, the firm committed to an inclusive and collaborative process, which included a committee composed of Sandy Hook Elementary School teachers and staff, parents, Newtown School District staff, members of the Board of Education, town staff, community representatives and the design/construction team at its core. This body coalesced as the School Based Building Advisory Committee (SBBAC), and its involvement continued into the construction phase, said Brotman.

“We believed — rightly, I think — this would be the only way to design a school building and campus that would stand as an expression of the needs, aspirations and spirit of Newtown, Sandy Hook in particular,” said Brotman. “Schools must provide a nurturing, welcoming and healthy environment for children to learn, and they must support community activities of all kinds. In order to fulfill this dual mission, our design solutions addressing safety and security had to be seamlessly integrated into an architectural aesthetic that says, ‘Welcome, come on in and join us,’” said Brotman.

To wit, the safety measures were implemented in a manner that rendered them essentially invisible.

“For Sandy Hook Elementary School, we explored how to prevent intruders from gaining access to the building, starting with a campus plan that delineates the separation from the street and surrounding areas while directing traffic flow strategically so that potential threats may be detected early,” Brotman explained. “We also located active public areas near the front of the building towards the arrival area so that they could easily observe approaching visitors and report any unwanted activities.”

Other strategies, according to Brotman, focused on delaying a potential intruder’s progress by locating the classrooms such that they were remote from any likely points of entry. Locks and automatic doors were also engineered to impede progress, and the landscaping was designed to be eco-friendly while driving visitors toward “preferred points of entry.” The surrounding landscape also informed the design as Brotman and his team actively integrated the school into the environment.

“The local ecology and geography of the area are important to the community’s identity. Our team worked to weave inspiration from the site and its surroundings into the design, establishing physical and symbolic connections with nature, in a way that would help organize the site to address security, vehicular access, pedestrian connections and so forth,” said Brotman.

Among the safety features incorporated into the project are impact-resistant laminated glazing on a variety of strategic spots throughout the building as well as hardened interior walls and doors. The hardware on classroom doors is engineered to automatically deadbolt upon closing.

“The school building also includes a number of technological strategies such as security cameras and lighting that are motion-sensitive. But the true strength of the design is in the planning, landscaping and layout that increase the available reaction time for identifying and responding to potential intruders,” said Brotman.

To read the entire article, check out the May/June issue of School Construction News.