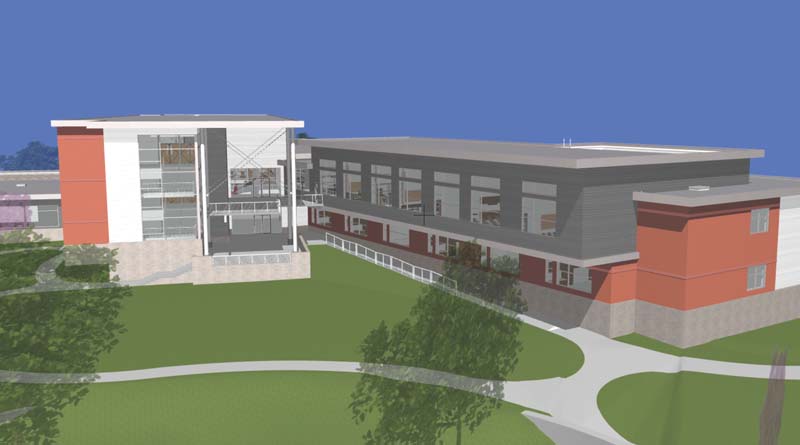 A rendering of the new Tuskegee Airmen Global Academy in Academy, which is slated to open for the 2019-20 academic year. Photo Credit: JE Dunn Construction

ATLANTA — With a completion date slated for July, the new Tuskegee Airmen Global Academy in Atlanta will soon open for the 2019-2020 academic year.

General contractor JE Dunn Construction celebrated the placement of the final steel beam in the framing of the new elementary school for Atlanta Public Schools (APS) in mid-March. Construction on the $27.6 million project began in July 2018.

The “topping out” ceremony included workers, vendors, suppliers and APS representatives who scrawled their signatures on the eight-foot symbolic beam. Topping out celebrations are customary in building projects, signaling that buildings under construction have reached their maximum height, with façade and interior work to proceed.

The new three-story structure—which replaces a 44-year-old facility that will be preserved for another use—will give the school greater street visibility and provide an enriched learning environment.

The 104,000 square foot Tuskegee Airmen Global Academy will accommodate a full-time enrollment of 753 and include a main entry/lobby space with a gallery, media center, cafeteria, gymnasium with stage, specialty classrooms, STEM and flight simulator labs, and outdoor lab/classroom space.

JE Dunn Senior Project Manager Jackie Avello says the project is unique in that there is a “focus on STEM curriculum and a design that captures the aspect of aviation to show the history of the Tuskegee Airmen.”

The Tuskegee Airmen was a group of African-American military pilots (fighter and bomber) who fought in World War II. They formed the 332 Fighter Group and the 47th Bombardmen Group of the United States Army Air Forces. The name also applies to the navigators, bombardiers, mechanics, instructors, crew chiefs, nurses, cooks and other support personnel.

All African-American military pilots (who trained in the U.S) did so at Moton Field, the Tuskegee Army Air Field, and were educated at Tuskegee University, located near Tuskegee, Alabama. The group included five Haitians from the Haitian Air Force, and one pilot from Trinidad in addition to a Latino airman who was born in the Dominican Republic.

Avello says the biggest challenge of this project was “working in an established neighborhood on a very tight sight. This required a precise scheduling of deliveries,”

Atlanta-based Collins Cooper Carusi is the project’s architect of record.