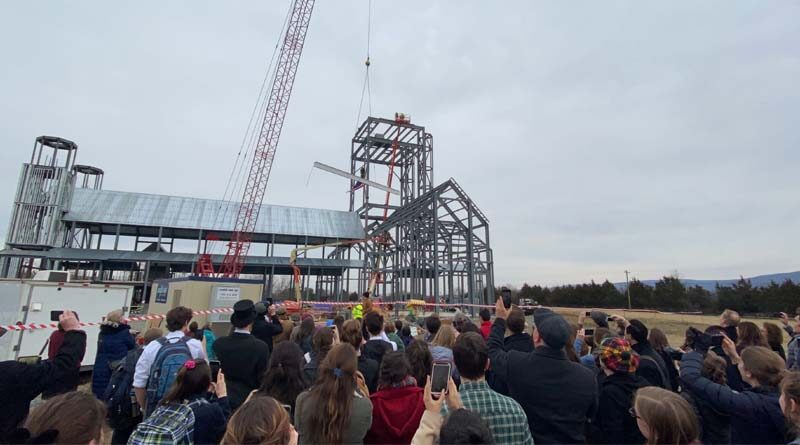 Work crews recently laid the final beam of steel on the chapel’s 114-foot-tall main tower, which will be visible for several miles due to its location at the highest point of campus. Photo Credit: Hoar Construction

On January 31, 2020, work crews laid the final beam of steel on the chapel’s 114-foot-tall main tower, which will be visible for several miles due to its location at the highest point of campus.

Construction teams have already finished laying underground utility piping and installing the concrete footings and slab and will now focus on assembling the chapel’s remaining steel skeleton, which is expected to be completed this month. This phase of the Christ the King Chapel is tentatively slated to be completed in March 2021 with an anticipated final completion December 2021.

“Christ the King Chapel is an outward manifestation of our commitment to Christ, and we are so grateful to Hoar Construction for their magnificent work,” said Christendom College President. Dr. Timothy O’Donnell.

“This momentous occasion brings us another step closer to the Chapel’s completion and we could not be more excited as a college and a community. I want to thank our generous benefactors for making this project possible, which will serve as an inspiration for students, faculty, staff and visitors for years to come.”

The Gothic-inspired chapel will feature over 100 stained-glass windows and a seating capacity of more than 850, providing much needed space for Christendom College’s growing student body. The college raised approximately $45 million for its comprehensive capital-campaign titled “A Call to Greatness,” which ran for two years and was completed in time for the school’s 40th anniversary celebrations in 2018.

O’Brien & Keane is serving as lead architect for the project, while Beyer Studio is overseeing design and production of the stained-glass windows. Other project partners include Meyer Consulting Engineers, Provectus Inc., and Pennoni.

Hoar Construction and its trade partners collaborated with the school throughout the pre-planning process to ensure the budget stayed within parameters while still holding true to the unique high-end design and finishes called for in the original scope of work.

Hoar incorporated several value engineering measures to help the development team navigate rising costs for steel and other building materials, and was able to save the college money on its original budget while still securing all of the steel that was needed to complete the 20,000-square-foot frame. Project managers also utilized a new type of mechanical system known as a variable refrigerant flow, which better controls the environment and lasts longer compared to the more expensive blue duct many churches typically use to transfer air underground.

“Hoar Construction is pleased to return to our roots by partnering with Christendom College on a project that is truly one-of-a-kind in this region,” said Dwayne Fleger, Vice President at Hoar’s Washington office.

“The chapel’s magnificent design and formidable structure tell a compelling story that will launch the college into the next phase of its development while also fulfilling its mission to equip the student body for their faith journey. We remain ahead of schedule and look forward to working with our trade partners on the next phase of construction.”

Christ the King Chapel will feature a new custom organ with 2,500 pipes built by Kegg Pipe Organ Builders, which will require several months of tuning before anyone can use the facility. In addition, the chapel will also have solid mahogany and red oak doors with leveled lead-pane glass and two 35-foot pre-manufactured bell towers. Pope Emeritus Benedict XVI blessed the cornerstone for the chapel in 2008 and after reviewing the college’s original blueprints declared the plans to be “beautiful.”