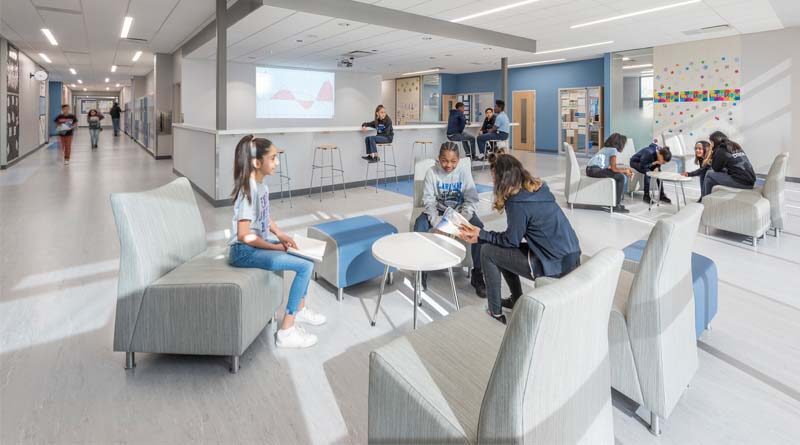 Laraway School won the sole award in the competition—which encompasses 12 states and the province of Ontario, Canada. Key recipients include Laraway Community Consolidated School District 70C and Legat Architects, the architect of record.

Among the selection criteria for the award are how the design captures the educational vision, cost effectiveness, green features, and how it advances innovative learning environments.

The jury, consisting of planners and designers from throughout the nation, praised the project’s “great use of site and development of active outdoor learning spaces,” as well as a planning process that “was inclusive and really looked to maximize the cultural and community connection.”

Construction on Laraway School was completed in August 2018. Prior to this project, the school was undersized and inefficient and had changed little since it was built in the early 1950s. Additionally, nearly 98% of its students are low income. The Laraway Community Consolidated School District 70C community knew it was time for a change, so much so that a new school achieved an 80% “yes” ballot on the referendum ballot.

Today, students not only have an appropriately sized modern gym, but an entire new PreK-8 school that supports learning beyond the classroom, connects to the outdoors, encourages student and teacher collaboration, and even celebrates Joliet’s history.

Henry Brothers was the construction manager on the project.

The school also features a 7th/8th grade modular tech lab that helps prepare students for Joliet Township High School’s Career Academies. Each two-week module within the lab connects with an academy at the high school.

According to a statement from the John Shaw Award selection committee, “The Laraway School demonstrates great use of site and development of active outdoor learning spaces. The planning process was inclusive and really looked to maximize the cultural and community connection.”

The John Shaw Award jury consisted of planners and designers from across the nation, as well as a senior facilities development manager with the Los Angeles Unified School District.