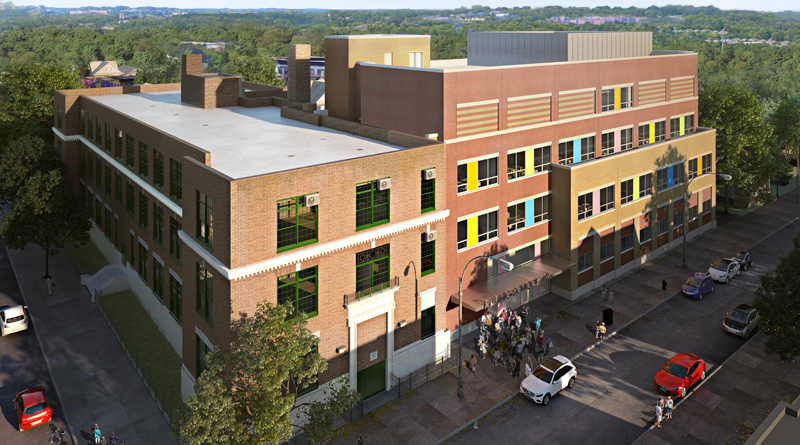 THE BRONX, N.Y.—New York’s P.S. 19X school has officially pulled back the doors on an addition to this rapidly expanding school.

RKTB Architects, which is based in the city, worked in concert with the New York City School Construction Authority (SCA) as both client and construction manager. RKTB’s addition doubles the available square footage of P.S. 19X’s educational space as well as its floor area. The architect also designed modern amenities for the school, including a unique space that functions both as an auditorium and cafeteria, and which will be viable both during school hours as well as after school. The addition at P.S. 19X also entails new administration offices to replace older offices at the school.

RKTB was also charged with renovating the school’s interior so that state-of-the-art classrooms would be available to all students. Additionally, the architects utilized digital technology to ensure during the planning phases that the new spaces would adequately, and correctly, align with the older parts of the school. This all had to be accomplished while being respectful of the aging mechanics and electrics that had to be integrated into the newer areas.

As students enter the reimagine lobby, they will step into a high-ceilinged space that is meant to be welcoming. Furthermore, decorative tiles on the school’s interior feature the images and quotes from such notable New Yorkers as Duke Ellington, Irving Berlin and Miles Davis.

RKTB worked in conjunction with general contractor Technico Construction Services, which is based in nearby Queens.

The school will continue to expand in the years to come as the student body grows even more. According to Albert Aronov, AIA, principal with RKTB, the improvements to P.S. 19X represents “a vast improvement in quality, accessibility, and safety.”

“The expanded, reimagined P.S. 19 will serve as a resource for Woodlawn and Bronx residents for generations,” Aronov said.

When asked to describe one of the more challenging aspects of the project, Aronov said in an email sent to School Construction News that at PS 19X, his firm had to work hard to integrate the addition with the existing school building so that it fit seamlessly “so that traffic flows properly and circulation supports both the new and existing programs.”

“And of course we had the challenge that comes with every K-12 project: determining what the user experience should be for students and teachers and then delivering that,” Aronov said. “At RKTB we believe that a school design should activate a child’s curiosity and support their ability to learn well, becoming their best selves in the process.

“It’s always rewarding to see a fruitful collaboration between our designers and the School Construction Authority (NYC SCA) come to life in a finished renovation, expansion or new school building. But even more rewarding is seeing the finished learning environment teeming with the activity of children and teachers, knowing that our efforts have enhanced the processes of learning and teaching.”