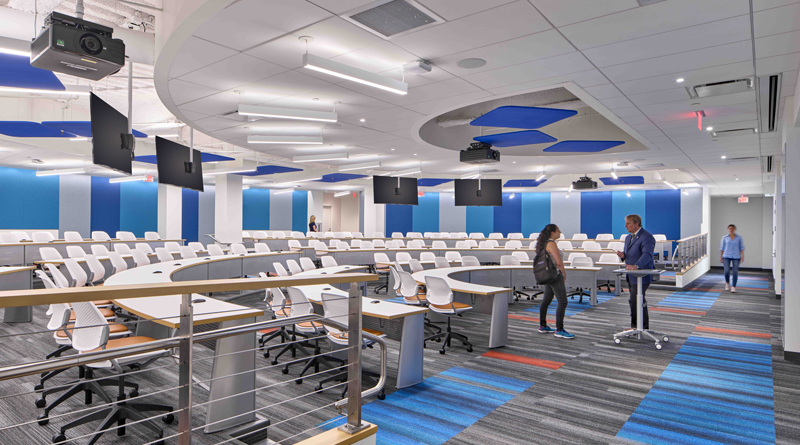 To maximize the calming interior of the new classrooms, FCA applied a color motif of orange, gray, blue and whites. Photo Credit: FCA

NUTLEY, N.J.—Established design and architecture firm FCA, which has northeastern offices in New York and Philadelphia, has made good on its plans to bring the Hackensack Meridian School of Medicine up to date.

The renovation, entailing 38,000 square feet of space, expands the amount of teaching and practice space available. New classrooms at the medical school will offer multimedia capabilities that are so necessary for instruction in the 21st century, especially in the medical fields. Further upgrades include new flexible learning studios, as well as hoteling spaces where visiting scholars can sleep.

As part of its survey of the older facilities, FCA determined how best to expand the medical school. After surveying the existing teaching capabilities, FCA went about adding in two new 170-person educational studios—each of which can be subdivided for small gatherings as needed. To maximize the calming interior of the new classrooms, FCA applied a color motif of orange, gray, blue and whites.

Also part of the medical school redesign are a tiered amphitheater that doubles as a large classroom. FCA utilized 2HR Glass and FireLite Plus WS glass to allow for greater visibility into the school’s lecture halls and classrooms there.

“It’s rare that an academic and physical needs assessment leads to the rapid deployment of capital to rectify shortcomings before it becomes a crisis,” Steven Stainbrook, a principal of the FCA team who worked on the project, said in a statement. “The School of Medicine’s leadership team, combined with Hackensack Meridian Health’s Facility Management and Real Estate Group, did just this—ultimately cutting what is typically a three-year process in half. The results include a flexible next-generation instructional space, new administrative workspaces, and lounges for students, staff, and visitors.”