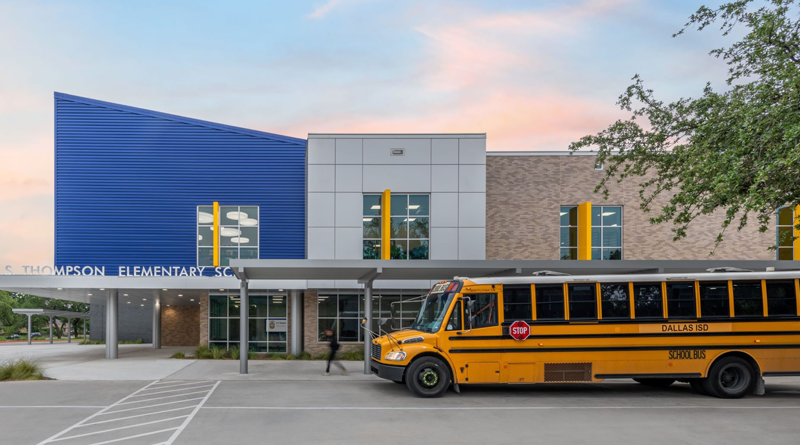 The $30 million school’s focus will be on the so-called STEAM subjects and will employ challenged-based educational techniques aimed at preparing students for practical experiences both in and beyond the classroom. The new H.S. Thompson facility encompasses 73,000 square feet of educational space for grades K-5. Seven science classrooms are included, as are various special educational rooms, outside play areas, arts classrooms and a new library and media center.

A multipurpose room and storage areas were also part of the architectural plan laid out by KAI. H.S. Thompson’s “active” spaces were designed such that they can be utilized during the day for educational purposes and are accessible for community use in the afterschool hours. A key part of this design aesthetic was the “cafetorium,” a combination dining commons and performance space.

KAI’s initial site work entailed master planning of the site as well as envisioning where a future middle school expansion can later be added. Then came the design of H.S. Thompson itself, which called for situating the library directly above the secured primary entry of the school. The double-height entryway allows for stunning views of Dallas’s downtown and the nearby Fair Park—and from the outside, the community can look back at H.S. Thompson as a paragon of a modern educational setting.

H.S. Thompson Elementary School is located at 5700 Bexar St., the exact same site as the demolished earlier school. The primary facade faces out onto Bexar Street, and the main ingress along that thoroughfare is a secured entryway situated prior to the administrative reception area.

KAI Enterprises, which was founded in 1980, works around the country in the design-build sector and is a certified minority-owned business. Under its corporate umbrella, the company entails subdivisions including KAI Design, KAI Engineering, KAI Build and KAI 360 Construction Services. Among the firm’s other school-related construction projects in the Dallas area are the Billy Earl Dade Middle School, also for the Dallas Independent School District.