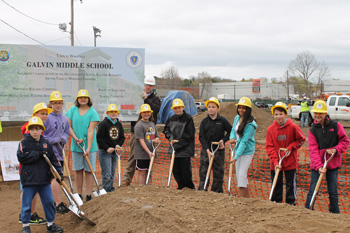 WAKEFIELD, Mass. — Galvin Middle School in Wakefield recently underwent a major groundbreaking for its new $60 million school. The new school will replace the existing school, which was originally built in 1955.

The project is being funded in part by the Massachusetts School Building Authority (MSBA) and the Town of Wakefield taxpayers; $32 million of the $60 million cost will be reimbursed by MSBA.

When the project is complete in August 2015, the school will span 180,000 square feet and include three floors. Highlights of the design include modern classrooms, laboratory space, a dining facility, gymnasium and auditorium. Also, the school will also include an outdoor physical education classroom and two turf fields that look to enhance the school’s athletic program, according to Marien.

The state-of-the-art school will be equipped with energy-efficient installations and is under the Massachusetts Collaborative for High Performance Schools. The school will feature high-performance HVAC system and the building will work to conserve extensive amounts of water and energy.

Students, staff and the community are anxiously awaiting the new school, and many were at attendance for the recent groundbreaking. Parents have been involved with the project and through the project team’s thoughtful approach, the new school will maximize student and parent access throughout its duration, as well as an early turnover of the new turf field.