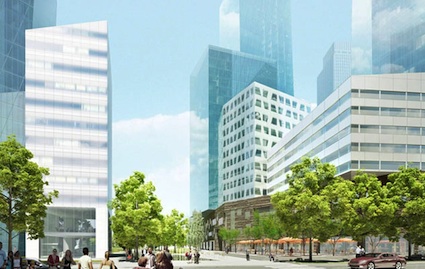 NEW YORK — Expected enrollment growth in the New York City school district, where land to build schools is not easy to find, prompted officials to think outside the box — but inside a high rise.

PS/IS 342, also known as The Riverside Center School, is a new public school that will occupy the first four floors of a New York City skyscraper.

The New York City School Construction Authority selected locally based Dattner Architects to design the school within Extell’s Riverside Center mixed-use development on Manhattan’s west side. The school will serve 488 pre-kindergarten through eighth grade students. It will feature more than 20 new classrooms, art and music rooms and a science suite, along with a library, gymnasium and cafeteria.

“What usually happens is, (the School Construction Authority) sees there’s a need for a new school because of the projected number of school age youngsters,” said a spokesperson for the New York City Department of Education. “They also look at schools in the neighborhood and utilization rates to determine whether a new school is needed.”

The project’s design will meet the Green Schools Guide, a LEED-equivalent system used for all NYC public school capital projects that Dattner Architects developed for the NYC School Construction Authority, officials from the firm said.

International design firm Atelier Christian de Portzamparc Architects and New York-based SLCE Architects designed the high-rise tower.
Dattner officials said the design and construction of the core and shell of the Riverside Center and the school interiors is being closely coordinated. Construction is expected to begin in 2014 and the school plans to open for September 2015 occupancy.

Authority officials said they have similar private-public partnerships like the planned PS/IS 342, including a Lower Manhattan school opening in September as part of a residential building and a similar project in East Harlem.

“It’s not unusual — though kind of rare in Manhattan — just because of real estate being very scarce,” a spokesperson for the School Construction Authority said. “That’s why we look for creative ways to build schools. There’s really no more vacant land in Manhattan and working with public private partnerships fills that void.”

Design features require working with the architect of the entire project to include specific features like a separate entrance for school operations.

The firm previously designed a number of projects for the New York City School Construction Authority, including PS/IS 276 The Battery Park City School and PS 79 Creston Academy Addition, both of which opened in the fall of 2010.