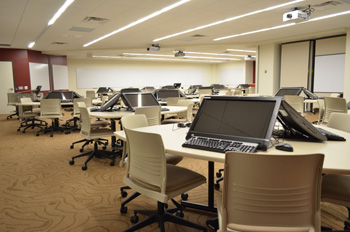 GLENDALE, Ariz. — Say goodbye to the days of 1,000-person lecture halls and the possibility of students sleeping at their desks. Arizona State University (ASU) recently added an active learning classroom, which engages students with more critical-thinking and problem-solving lessons through the use of technology. It was opened for pilot use in August 2012 and for full classroom use this January.

“The School of Life Sciences wants to build learning environments that go away from the lecture hall environment, where we believe students are passively engaged, and allow students to be actively engaged. If they have better academic content, they can retain it longer instead of forgetting it two seconds after they leave class,” said Kegan Remington, instructional technology analyst at the university.

The classroom, built for the School of Life Sciences, holds 96 students grouped into tables of six, and one 23-inch touch-screen computer is available for every two students. Not only can students create documents in groups in real time, they can share them with the rest of the class using the room’s four projectors. Polling questions, open-ended questions and even drawing questions can be evaluated and used to create discussions throughout the classroom.

“The students love it. All the technology in that room is comparable to what they carry around in their pockets. In other classrooms, they’re lucky if computers are there at all,” Remington said. “The student response has been that [this learning environment] makes them feel more confident going into testing because teachers can isolate misconception on the spot. We thought students would maybe be intimidated by it, but they like it and have matured enough to really think about the way they learn.”

As for the teachers, the university is getting mixed reviews, not because of quality, but because of the new teaching methods required in the interactive classroom “It’s difficult to change the ways someone’s been teaching for 20 to 30 years. [This classroom] takes a different kind of teaching style that involves guiding students instead of just regurgitating content,” Remington said. “We’re starting to create new curriculums, even partnering with companies like Pearson to get students thinking in a more visual way.”

Construction of the facility began in February 2012. Dick & Fritsche Design Group, headquartered in Phoenix, was the architect, and Mesa-based SD Crane Builders served as the general contractor.

The $625,000 classroom was a “pretty in depth construction project,” Remington said. The construction team had to tear apart an old room, which previously was used as a lichen herbarium and stored a large research collection that has since been moved off campus. The room contained algae and mold, as well as had a lot of infrastructure problems that were not updated since the facility was originally built in the 1960s.

The team had to pull out all the electrical and data wiring to prepare for the wireless network points and A/V equipment required to build the room. The new technology also required more bandwidth, so they had to install wired infrastructures in order for every computer and device to have a network connection. “The old classroom only had a couple of electrical outlets, which don’t fly anymore. I can’t even count the number of electrical outlets in the room now,” Remington said.

ASU as a whole has already taken notice of the classroom’s effect on learning, and another classroom like it is in the construction planning phase through the college of Liberal Arts and Sciences, said Remington. Within the School of Life Sciences, there is already talk of building more, but likely on a smaller scale — for now.

ASU isn’t the only school to approach this kind of learning. In fact, the classroom is modeled after two different kinds: one from the University of Minnesota and one from ASU’s chemistry department that has the same concept of pods, but was built four or five years ago without as up-to-date technology. Although Remington cited these other examples, he believes that ASU is at the forefront of pushing the capabilities of this type of environment by making it more available to students.

Of course, for a school of about 76,000 students, it will be difficult to give everyone access to this type of learning environment, but the university is trying to find ways to give students the best of both worlds by in the future possibly assigning specific weeks for students to be in the more interactive classroom setting. “We’re trying to give access to as many students as humanly possible,” Remington said.