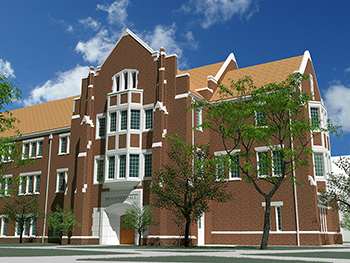 The $22 million project is designed by Orlando, Fla.-based SchenkelShultz Architecture in association with New York-based Robert A.M. Stern Architects. Midway, Fla.-based Ajax Building Corporation is serving as the general contractor on the project.

“This is a 21st century higher education building,” said J. Thomas Chandler, AIA, president and chief operating officer of SchenkelShultz Architecture. “The whole purpose of this new home was to create this collaborative and interactive environment for students and faculty. This gives them the opportunity to implement significant goals and objectives that the administration has for 21st century higher education.”

The new building, slated for completion in September 2014, is organized around three floors, Chandler said. The first floor encompasses a student commons area, with a very collaborative and technology-rich environment. This floor includes other support functions such as multipurpose areas and a small cafeteria. Chandler described the floor as one where “students interact with students.”

Students collaborate with faculty and staff on the second floor, Chandler said. The second floor will have an academic success center that allows for interactive instructional learning and gives the students the opportunity to work directly with academic advisers or teaching assistants on a much smaller scale outside of the classroom. This teaching floor will also house a series of larger scale classrooms. The third floor will house the dean’s suite, the international program and serve as a hub for career development.

“As you move up in the building, the first floor is more student-activity centric, the second floor is student-faculty related and the third floor is more related to faculty with these specialty programs,” Chandler said.

Designed to achieve LEED Gold certification, the building also incorporates green elements such as an HVAC system that has a chilled-beam approach. The design team was also able to take advantage of the master campus storm-draining system that is already in place at the university. Plus, the building will have a highly insulated roof, walls and glazing systems.

The most difficult part of the project, Chandler said, was designing it to fit the collegiate gothic style of architecture that makes up the historic district on the campus, where the new business school is located. Plus, he said the building is being constructed on an incredibly tight site, so being able to meet the historic guidelines and fit it into the campus utility infrastructure also became a challenge.

The design team used Building Information Modeling (BIM) technology to optimize efficiencies and constructability. Using this software, they will also be able to provide a “smart” record model of the building at completion, which will help the maintenance and operations staff maintain the building in the future.