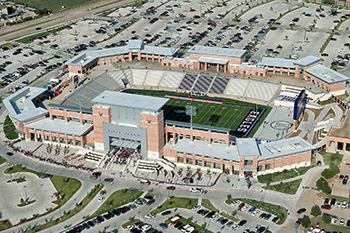 ALLEN, Texas — Structural repairs will begin soon on the Allen Independent School District’s (Allen ISD) two-year-old Eagle Stadium, which has been closed since May 2014 due to extensive cracking across the facility’s concourse level. The stadium was completed by McKinney, Texas-based general contractor Pogue Construction and architecture and engineering firm PBK based in Houston, in 2012 at a cost of $60 million.

On Oct. 6, the district’s board of trustees approved the use of up to $2 million in bond funds to conduct the repairs. However, Allen ISD Superintendent Lance Hindt told the Dallas Morning News the funds would serve only as a “security blanket” for the district as to not slow the process. Instead, Pogue and PBK will foot the repair bill in its entirety.

Pogue Construction has offered to complete all of the necessary stadium repairs and PBK will assist the district’s experts with architectural services, according to an Oct. 7 statement issued by the district. Both firms have stated that the work will be done as “warranty work” and that they will not bill the school district. Additionally, all work will be directed and monitored independently by the Nelson Forensics and Datum Engineering.

Nelson Forensics was initially hired by the district in 2012 to examine the cracking only, but that contract was later expanded to review the entire 18,000-seat stadium. The firm identified a number of design, construction and engineering flaws primarily throughout the concourse framing, retaining walls, press box support columns and structure, single-story structures, the main scoreboard and the overall durability of the stadium, according to the Dallas Morning News.

Consultants from Nelson Engineering ultimately recommended that repairs be completed in six phases over a 10-month period. Datum Engineering designed those repairs and was assisted by Nelson. Though the district initially planned to issue bid requests for each repair phase, warranty and liability concerns have led to limited interest from outside firms, according to the district’s statement.

“Since the problem was first identified, the school district has had three goals in mind,” Hindt said. “We want to repair the stadium and return it to the condition our board and community expects, and we want the repairs to be completed in May 2015 so that Allen High School graduation can be held in Allen. Finally, we want the repairs to be done at no cost to the school district. This offer from Pogue and PBK meets all of those expectations.”

Closing the stadium has also forced the district to absorb unexpected costs and loss, for which district officials plan to seek reimbursement.

Despite all legal issues, Hindt added that both Pogue and PBK maintained “a constructive working relationship” with the school. “From the start they indicated their willingness to resolve any problems to our satisfaction and to cover all costs that are a result of the repairs and closure,” Hindt said.

“We are pleased with the progress being made and we support the agreement proposed by Pogue and PBK,” Louise Master, president of the Allen ISD Board of Trustees, said in a statement. “I am confident that the project will be well monitored and completed on schedule so that our students and community can once again enjoy using the facility.”

Work will begin with repairs to the stadium’s main scoreboard, and will move to the basement walls and main concourse structures. Repairs to the concourse itself are slated for the final phases, and partial demolition is not expected.