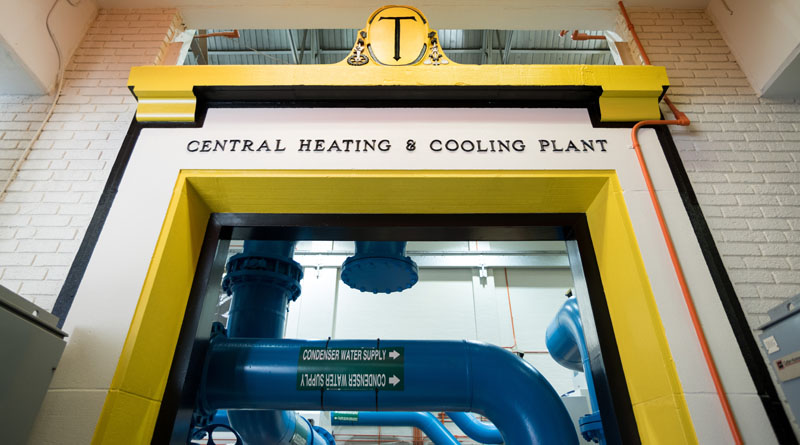 Georgia Tech earned the rebate by completing various energy-efficiency upgrades that began in October 2015 and were completed in March of this year. The planning and design process for these upgrades began even earlier in June 2014, followed by an energy audit conducted by Johnson Controls (headquartered in Milwaukee, Wis.) in December 2014. The project had a budget of $7.7 million. Locally based RMF Engineering was the design engineer on the project, with multiple project committee and team members from Georgia Tech as part of the planning team.

With the completion of these upgrades, Georgia Power estimates Georgia Tech will be able to save more than 16 million kilowatt-hours (kWh) annually. “Basically, the project was a chill water plant optimization scheme that allowed us to more efficiently make and distribute chilled water throughout the campus,” said Greg Spiro, P.E., CEM, senior design engineer for facilities management at Georgia Tech. “For example, by installing VFDs on pumps, chillers and support elements in the plant, we were able to provide more precise motor control, which greatly impacts energy usage.”

The primary objective for this project was to reduce the power consumed, per ton of cooling by reducing kilowatt used per ton (kw/ton) of campus chilled water production, according to Donald Alexander, P.E, RCDD, CEM, academic design professional for facilities management at Georgia Tech and project manager for the energy upgrades project. After Johnson Controls completed its audit in 2014, the Georgia Tech Committee evaluated the recommendations made by the company and decided what combination of measures were best.

“With a project and budget of this size, the development stage was a very important and intense portion of the initiative,” said Alexander. “There was significant negotiation of staying within budget parameters while also assuring that the required energy savings would be met.”

During both the planning and construction periods, the Georgia Tech Project Committee members met every two weeks to review progress and assess recommendations, according to Alexander. “The actual contracting process was a challenge for Georgia Tech, as performance contracting was new to the financial and legal teams of the Georgia Tech,” he said.

Alexander spent a significant amount of time and effort steering the project through the many phases of approval, added Spiro.

Georgia Power has awarded more than $44 million in rebates through the Commercial Energy Efficiency Program since the program started in 2011. The program includes educational resources, rebates and incentives available to all commercial customers such as school systems, universities, hospitals, museums and more.