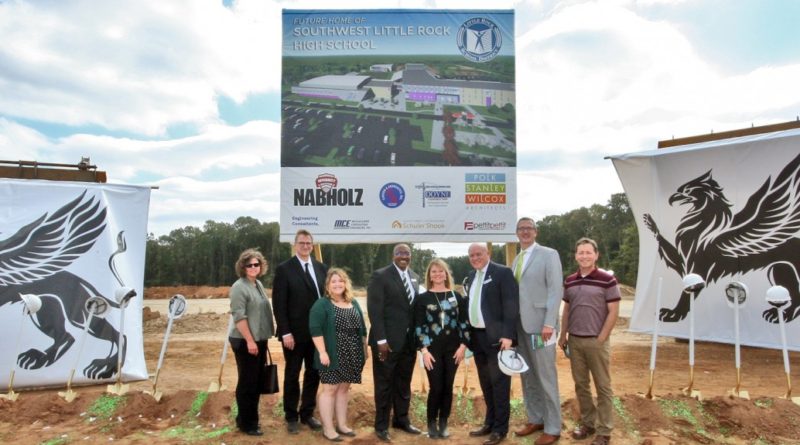 LITTLE ROCK, Ark. — It’s been just over 50 years since the Little Rock School District broke ground on its first public high school, and now, after five decades, the district is finally breaking ground on what will become its largest high school.

Scheduled to open in August 2020, the new school will replace the district’s existing McClellan and J.A. Fair high schools with a facility that can accommodate 2,250 students, from their freshman through their senior years.

The impetus to build the new secondary school came during the tenure of former Superintendent Morris Holmes, who resigned the position in 2013. With the participation of elected school board officials, 55 acres of undeveloped property between Mabelvale Pike and Mann Road was purchased. Planning for the 400,000-plus-square-foot southwest campus was authorized and proceeded prior to the state’s takeover of the district in January 2015.

Presently, the new school is expected to cost $101 million, with a $5 million contingency fund baked into the total number. “We are a district on the rise,” current Little Rock Superintendent Mike Poore told the Northwest Arkansas Democrat Gazette.

The features envisioned for the school include large classrooms, shared collaboration spaces, simulation labs, virtual classroom technology and makerspaces. The school plans will also incorporate a 1,200-seat auditorium and an arena-size gymnasium, a combined football and soccer field with indoor and outdoor practice fields, and a field house. There will also be a three-story, 310,000-square-foot academic building that aligns with contemporary pedagogical approaches like student collaboration and other nontraditional teaching methods.

On the other side of the academic spectrum, the new school’s athletics department will surely benefit from a 2,250-seat basketball arena and and an auxiliary gym that will be large enough to host tournaments. Likewise, the joint football and soccer stadium will host 4,000.