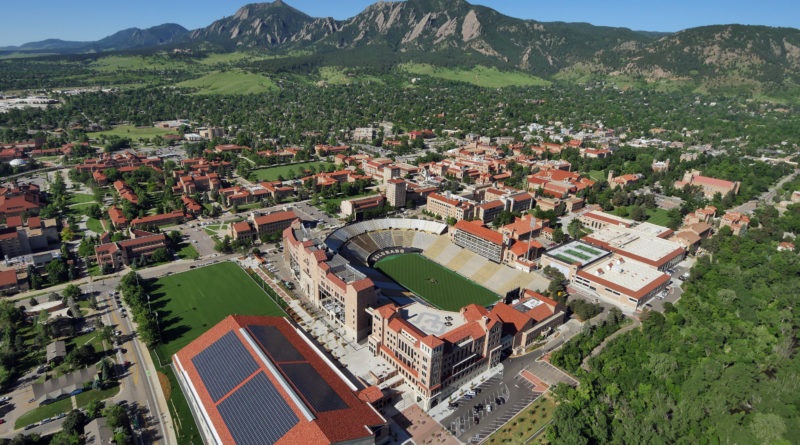 The most noteworthy sustainability feature of the athletic facilities upgrade project is the 850-kilowatt solar array that sits atop the IPF, with an estimated annual production of more than 1 million kilowatt hours. Photo Credit: Glenn Asakawa/University of Colorado, Boulder

BOULDER, Colo. — Three athletic buildings at the University of Colorado, Boulder (CU) were certified LEED Platinum in fall 2017 — the highest possible LEED rating. With this latest certification by the USGBC, CU now has 25 buildings certified LEED Gold or better, either for new construction or major renovations.

The three new LEED Platinum certifications applied to the Champions Center, the net-zero-energy Indoor Practice Facility (IPF) as well as the extensive renovations done to the Dal Ward Athletic Center. All three of the athletic buildings were included in a CU athletic department facilities upgrade project that arrived at completion in 2016. The three buildings were certified in December 2017, which raised CU’s number of LEED Platinum certified building to 10.

Completion of the new Champions Center brought a new home for CU athletics administration, the CU football program, Olympic sports, the CU Sports Medicine and Performance Center as well as the Champions Club. The IPF is a climate-controlled facility and includes a full football field as well as a six-lane, 300-meter track. Upgrades to the Dal Ward Athletic Center feature new locker rooms and a new weight room for CU Olympic sports, a new room for the Herbst Academic Center and the Touchdown Club room. The Champions Center as well as the Dal Ward construction also included the addition of a pair of premium seating areas at Folsom Field.

“Achieving LEED Platinum for a project of this magnitude is a testament to the work and collaboration of several campus departments and partners,” said David Kang, vice chancellor for infrastructure and safety at CU in a recent statement. “Athletics has been a key driver of campus efforts to be a leader in sustainability, and this project is a shining example of that.”

The three-buildings project was led by Denver-based Mortenson Construction and Populous — a Denver-based architecture firm — as a joint design-build venture. Noresco, an energy services company based in Boulder, Colo., provided sustainability consulting services on the project. Construction on the project began in 2014, with different aspects of the project opening in 2015 and 2016 before its final completion at the end of 2016.

The most noteworthy sustainability feature of the athletic facilities upgrade project is the 850-kilowatt solar array that sits atop the IPF, with an estimated annual production of more than 1 million kilowatt hours. The entirety of the energy use of the IPF is offset by the solar array, which includes 28 percent of  the Athletics facilities’  usage.

Other sustainability aspects of the athletics project that helped to earn the highest LEED rating for the buildings include ample daylighting in the Champions Center and IPF, reduced water use through sustainable fixture selection, mechanical and lighting systems controls that enable optimization of energy, heating and cooling systems, and a new stormwater detention pond at the corner of Folsom Street and Stadium Drive that provides natural filtration of stormwater from the site.

“These state-of-the-art facilities have proven transformational to the success of our Athletic Department,” said Rick George, athletic director at CU, in a recent statement. “We’re proud that sustainability was at the forefront in the way they were built and how we use them every day.”