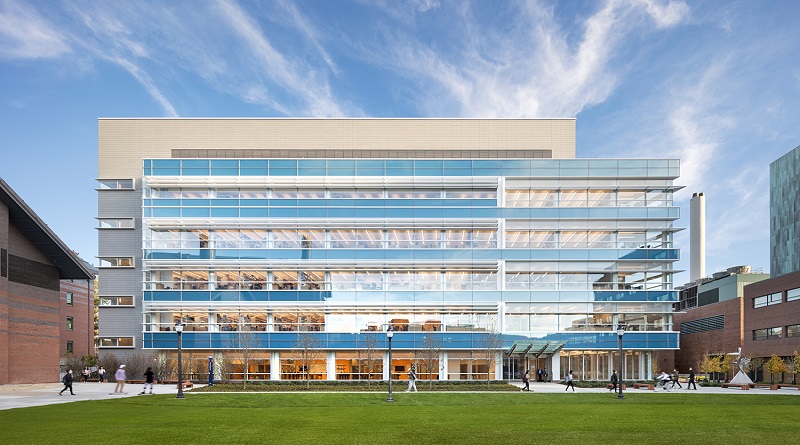 The facility offers roughly 118,000 square feet of laboratories, with open lab spaces at the perimeter with interior support space, offices and public spaces at the ends of the building, and expression of these elements on the façade with glass curtainwall as well as expression of “servant” spaces such as stairs and penthouses with tile panels.

The School of Engineering designated three floors for housing programs such as robotics, advanced manufacturing that includes, various rugged industrial keyboards in an integrated computing system, cyber physics, virtual and augmented reality, mechatronics, and other fields. The Institute for Systems Genomics consists of two floors, including its Center for Genome Innovation, microbial analysis and resource service, and other programs.

While working on a very constrained site, as well as fielding concerns from some of the faculty regarding the open plan labs, the team was able to proceed and overcome these challenges with careful planning and discussion.

According to Mitchell Giurgola Partner James R. Braddock, AIA, UConn’s new science facility is, to the best of his knowledge, the first example of an open plan engineering lab.

“We have done numerous open plan science labs, but this is our first open plan engineering research lab, where numerous groups do individual projects such as using grinding machines, in a common space,” said Braddock. “We believe this fosters interaction and collaboration among groups and will have a positive effect on research outcomes. It also facilitates changes in space need among groups as research projects begin and end, optimizing space utilization.”

According to Braddock, actual researchers were not chosen until late in the process, but ”proxy” committees were constituted for each of the program groups, and numerous meetings were held with each committee to gain input on the design as it progressed.

Gov. Malloy stated on Twitter that this new building will help drive new innovations in a range of scientific disciplines, expressing the pride of another milestone in the Next Generation Connecticut Initiative, aiding the state’s goal of expanding STEM to promote economic growth.

“This building is the culmination of significant investment by the state of Connecticut in the field of STEM, and in the future of engineering,” Kazem Kazerounian, dean of the School of Engineering said in a statement posted to the school’s website. “Nearly 40 percent of our state’s economy is generated by engineering-related industries, and with our 70 percent increase in engineering enrollment, and significant investment in resources, UConn is providing research, talent, and technology that will pay dividends for decades to come.”

The new UConn building was designed to achieve LEED Silver Certification and to fulfill Connecticut High-Performance Building Standards. It was built by Fusco Corp. of New Haven, Conn., with construction beginning in 2015 and finishing this spring.