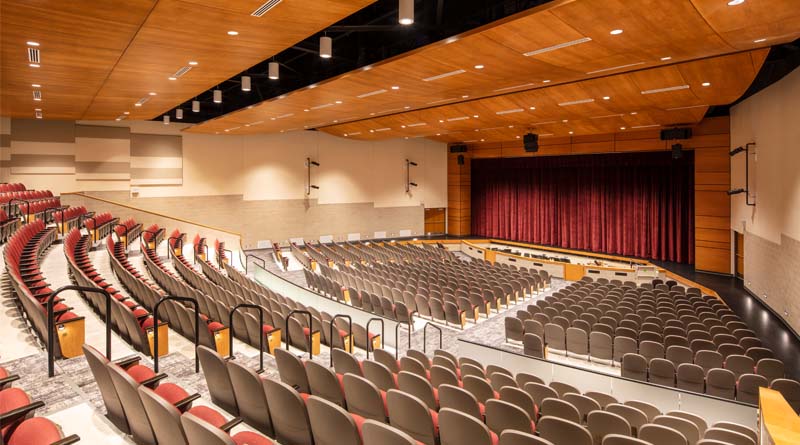 On March 7, more than 150 members of the Moline-Coal Valley School District 40 community gathered to celebrate completion of the 47,000-square-foot facility. This new center will not only create opportunities for students; it also benefits the entire Moline community and Quad Cities region as an education and entertainment venue.

“From the classrooms to the multiuse and performance spaces, from the set shop to the theater rigging and technology, we now truly have a state-of-the-art area for the arts and we’re thrilled to share such a tremendous facility with the community,” says Moline High School Principal Trista Sanders.

Designed by Legat Architects, which has offices in Illinois and Ohio, and built by Iowa-based Russell, the Bartlett Performing Arts Center stems from a partnership between Moline-Coal Valley School District and the Robert E. Bartlett Family Foundation.

Patrick Brosnan, president and CEO of Legat, recalls that throughout the process they asked, “‘What’s right for students? How does it fit the curriculum? How does it fit the community?’ The answers to these questions influenced everything from the seats and flooring to the ceiling and infrastructure.”

“Theatergoers in the back of the old auditorium had trouble seeing the stage and hearing the performers,” says Legat Project Manager Jeff Sandberg.

“The renovations significantly increase the floor slope to create excellent views from every seat in the house, plus the new systems provide crystal-clear sound.”

This “sound shaping” was modeled by Legat’s consultants (Schuler Shook, Talaske, Advanced Communications), which found the ideal slope and shape to maximize the experience of every audience member.

The renewed auditorium has four large wood veneer “clouds” that stretch between the stage and the back wall to further improve acoustics. Every surface in the new theater is shaped to allow a person in the back of the theater to hear someone on stage speaking in a normal voice without a microphone.

Handicap upgrades were also done to improve seat-to-stage accessibility and designated seating areas for people in wheelchairs. Supporting spaces include an adjacent scene shop with garage doors that open directly to the stage and outdoors, a new dressing and makeup rooms, and storage.

A highlight is the new river-inspired lobby, which is part of the 12,500 square foot addition. It winds between the Performing Arts Center’s two entries and separates performance and instructional spaces. A curving glass wall encourages lobby activity and helps to build anticipation for the evening’s performance.

During the Center’s open house, many guests admired the curving stone wall in the lobby. Inspired by Moline’s location between two rivers, this “river wall” starts outside the building and runs the length of the lobby to connect both entrances.

Part of the project is the addition of a multipurpose room that doubles as a black box performance space. This room, equipped with a small stage and audiovisual/lighting systems, hosts smaller performances and practice sessions when the larger auditorium is booked. Dance, cheer, and other groups can also use the black box for rehearsals. Offices, practice rooms, and storage spaces are located between the classrooms.

The Performing Arts Center was named after philanthropist, arts enthusiast, and businessman Bob Bartlett, a figure who devoted much of his time and resources for the betterment of Moline and its residents. His influence can be seen in everything from establishment of the John Deere Classic (charity golf tournament) and sponsorship of nursing student scholarships to donations to institutions such as schools, Two Rivers YMCA, and the Boys and Girls Club of the Mississippi Valley.

At the dedication ceremony, Dr. Deborah Bracke, chairman of the Robert E. Bartlett Family Foundation sums it up best by calling the new center a “vital hub of creativity and engagement; a state on which our hopes and dreams for the City of Moline can be achieved.”