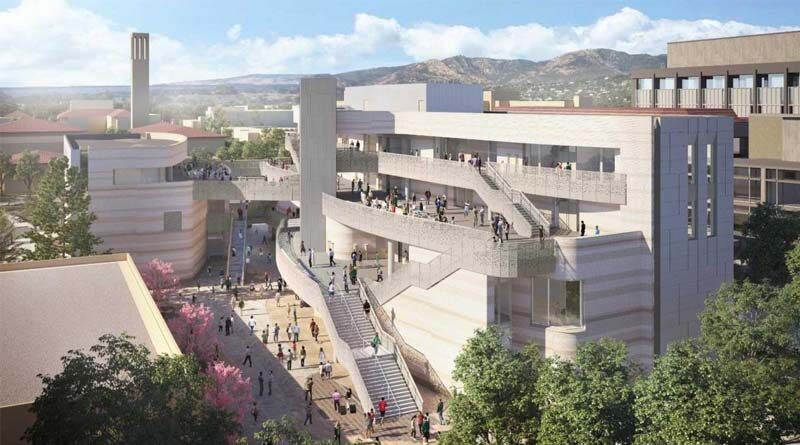 The new facility at UCSB will include 32 classrooms and lecture halls. Photo Credit: LMN Architects

SANTA BARBARA, Calif.—The University of California, Santa Barbara (UCSB) is undergoing an expansion project to add another teaching building to its seaside campus along the “American Riviera.”

The $78 million, 95,000-square-foot project will feature lecture halls, learning spaces and flexible discussion rooms. The building will be a project-based learning hub for UCSB, comprising 32 classrooms and lecture halls, each of which will be able to handle anywhere from 30 to 350 students each.

The new building was designed by LMN Architects of Seattle and was meant to both meld in with the Southern California construction motif as well as take advantage of the natural elements of the surrounding campus area, which abuts the ocean. LMN’s design aims to achieve, at a minimum, LEED Gold certification.

Directly outside the new learning annex, there will be spaces for nearly 2,000 bicycles to be parked—rather appropriate for a Southern California college. Also, an exterior “street corridor” will encourage interaction between students and faculty as they walk between and among UCSB’s buildings. Furthermore, views from the upper-floor classroom windows will allow students and faculty views of the nearby UCSB Pardall Mall to the west, Library Mall to the north and, of course, views of the Pacific Ocean and offshore Channel Islands to the south.

General contractor C.W. Driver Companies broke ground on the construction in March. Project executive Tom Jones said that his firm was charged with fashioning a classroom building that would be a major nexus of educational activity at the heart of the campus.

“Leveraging our expertise in higher education, we recognize the need to create a dynamic environment that not only emphasizes academic inquiry for students, but also fosters interpersonal connections that inspire scholarly ambition, creativity and discoveries with a wide-ranging impact,” Jones said in a recent statement.

Added Liana Khammash, project manager for UC Santa Barbara: “As our university rapidly expands, exceeding our existing classroom capacity, there is a strong need for the new 95,000-square-foot classroom building. This new building will seamlessly integrate into the surrounding public spaces, which have been conceived as extensions of life on campus.”

The project is on the fast track, with a projected completion time of Winter 2022.

General contractor C.W. Driver Companies is over a century old, and in the past few years has expanded its school construction work in California, including in San Diego County and Orange County. The firm recently appeared in Engineering News Record’s Top 150 General Contractors and Top 100 Construction Managers.

Last fall, UCSB also broke ground on a $5 million tennis facility. The campus currently is home to over 26,000 students.