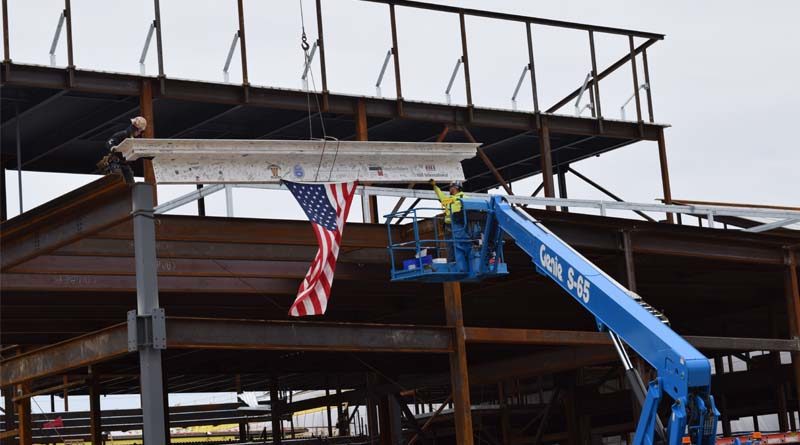 The signed steel beam is lifted into place at the sprawling new facility slated to be completed in 2022. Photo Credit: BOND Building Construction, Inc

WEYMOUTH, Mass.—School personnel, elected officials, community members and representatives of BOND Building Construction, Inc. gathered recently for a topping-out ceremony that celebrated completion of the structural steel frame for the new Maria Weston Chapman Middle School. People cheered as the last steel beam was lowered into place, with the gathered distanced and wearing masks to ensure safety protocols were observed.

But before the new school could be built, the former Maria Weston Chapman Middle School, which was built in 1961, had to be demolished on the same footprint from which would spring the new school. Everything at the site except for the gymnasium, which is being renovated, was razed. Furthermore, demolition and new construction had to take place in a busy neighborhood, so construction personnel and school officials had to work with the surrounding community to ensure that disruption was kept to a minimum. This meant implementing noise-mitigation procedures, dust control, vibration monitoring, as well as ensuring that vehicular traffic could be rerouted where necessary.

The new 252,170-square-foot, $164M Maria Weston Chapman Middle School was designed by HMFH Architects, Inc. It will be home to nearly 1,500 students in grades 6 through 8. Modern learning amenities included in the redesigned campus include three distinct academic wings that surround centrally located “exploratory labs.” One wing will host administrative offices, music classrooms, fitness area, auditorium and a centralized kitchen space. Furthermore, the wings will all branch out from what is being called the campus’s “Town Square,” where students will dine and be able to otherwise gather.

During the topping-out ceremony, Massachusetts state Rep. Ronald Mariano (D-Norfolk) said that the Chapman school will commence a new era for the district’s schoolchildren as well as for the community.

“The impact is five times what you expect it to be,” Mariano said.

Frank Hayes, president of BOND Building, said that among his firm’s missions is to ensure that innovative and modern learning spaces will be achieved in the new school.

“This cutting-edge learning facility will offer students top-of-the-line technology that will really elevate and enhance the learning experience,” said Hayes, “and we’re excited to be part of the team creating that vision.”

“We are at our best working closely with all stakeholders to develop comprehensive plans for safety, mitigation and efficiency,” added David Capaldo, director of public education for BOND Building. “We aim to be a good neighbor to the surrounding community.”

“Our architect HMFH Architects, our owner’s project manager Hill International, and our construction manager, BOND Building, will be on time and on budget,” added Jack McCarthy, executive director of the Massachusetts School Building Authority. “How do I know this? Because they’ve done this for us all over the Commonwealth.”

The new Chapman Middle School is expected to be completed in July 2022.