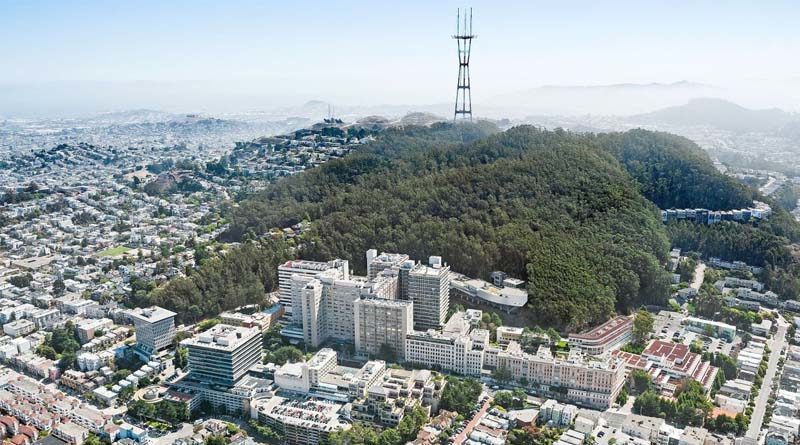 The estimated $700 million project will include the building as well as improvements to Parnassus Avenue. Photo Credit: HGA and Snøhetta

A San Francisco institution for more than a century, UCSF’s Parnassus Heights campus is renowned for innovation in research and education. The Parnassus Research and Academic Building, known for now as the PRAB, will anchor the west end of the campus and replace UC Hall, UCSF’s oldest building at Parnassus Heights, which was built as the University of California’s first hospital in 1917. This is one phase of a comprehensive planning process that is underway for a major renovation and expansion of the campus over the next decade.

The estimated $700 million project will include the building as well as improvements to Parnassus Avenue, extending Fourth Avenue, creating a new promenade and loading dock, the demolition of UC Hall, and the initial components of an “energy center” that will ensure UCSF can install new infrastructure when energy technology changes down the road.

Through a collaborative partnership, HGA will serve as the Executive Architect and Architect of Record, leading programming, planning and project management as well as the design of research lab and technical program spaces. Snøhetta will lead the overall conceptual design for the building and surrounding public realm, including landscape and site improvements.

HGA and Snøhetta submitted an innovative joint proposal, and UCSF— an institution known for teamwork between its scientists, clinicians and educators—particularly admired the collaborative nature of the proposal. A team led by Chancellor Sam Hawgood, MBBS, selected HGA and Snøhetta from a final list.

“These cutting-edge firms were willing to join us in thinking outside of the box to face the unique opportunities that we see in this critical phase of the Parnassus plan,” said  Daniel Lowenstein, MD, UCSF’s executive vice chancellor and provost. “In particular, they bring new ways of fostering collaboration, an openness to our relationship to the local community and a robust and productive connectivity with the rest of the campus.”

Patti Mitchell, UCSF’s director of Campus Design and Construction for the west zone, and deputy campus architect, said the winning team had a particularly people-minded approach. “They had innovative ideas about how people would interact when they were in the building,” Mitchell said. “Their proposal was more human-centric versus others that were more building-focused.”

Both firms will work with a wide-ranging, interdisciplinary design-build team from UCSF in an integrated design and construction center to support collaboration, public engagement and the development of a holistic design. Mitchell said UCSF will work with HGA and Snøhetta to select a design builder, and that firm will serve as the general contractor, with the designers integrated under that contract, along with an array of trade partners.

“The HGA and Snøhetta team embody traits that are not just important for a successful design partnership, but also represent our aspirations for the PRAB project, including collaboration, creativity, innovation and excellence,” said Brian Newman, senior associate vice chancellor, UCSF Real Estate, and vice president, UCSF Health. “The two firms see the project site and its topographical challenges as opportunities to open up the interior of the campus and facilitate movement from the PRAB to other buildings.”

Breaking up the silos that once defined scientific research, UCSF creates spaces where a cell biologist might cross paths with an immunologist, leading to a collaboration that could create a new approach to treating a deadly disease. While the bulk of the PRAB will be for researchers, a portion will be designed specifically for educational uses. Graduate students will be able to work in labs and attend classes under one roof. To enable telepresence and build on recent advancements in virtual and hybrid learning, classrooms will be designed with accessibility and flexibility in mind.

“The HGA and Snøhetta teams were inspired by the culture of collaboration and dedication to teamwork for which UCSF is known,” said Chris Martin, science and technology market sector leader and principal at HGA. “We are excited to be a part of expanding the legacy of this premier institution by creating a forward-looking research and academic setting to advance human health outcomes and, hopefully, facilitate scientific breakthroughs, where new methods and technologies can lead to exceptional results.”

“We’re excited to work with UCSF, HGA, and local partners to bring the PRAB project to life,” said Alan Gordon, Partner and architect at Snøhetta.  “Our work is defined by collaboration, as we work with stakeholders to realize educational and cultural projects alike. UCSF has become a landmark institution in San Francisco, and we look forward to reimagining this site and the future of the Parnassus Heights campus.”

Michelle Delk, also a Snøhetta partner and landscape architect, added “Snøhetta’s approach centers on cultural exchange and the public realm.” Delk explains, “The PRAB project will not only serve clinicians and researchers at UCSF, but will include new vistas, promenades, and public gathering areas that will take advantage of San Francisco’s climate and natural context to bring added beauty to the site and campus.”