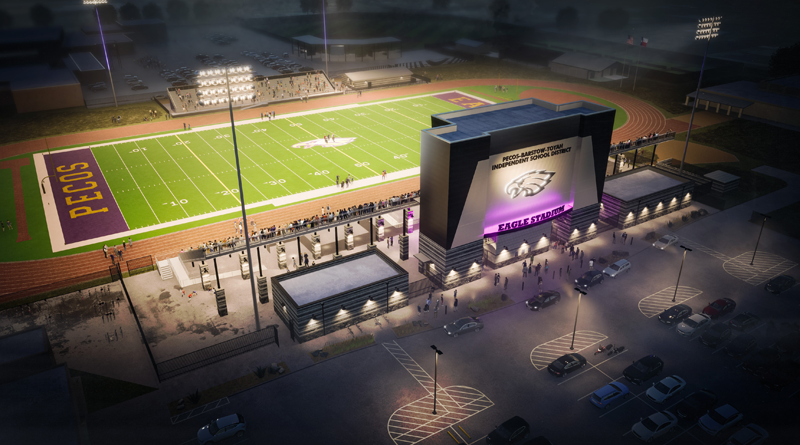 The sleek new facility is aiming to be completed by August of this year. Photo Credit: VLK Architects

PECOS, Tex.—The Pecos-Barstow-Toyah Independent School District has broken ground on a new athletic facility that will be the toast of this area of southwestern Texas as it replaces an older facility on the same site.

As redesigned from its former iteration, Eagle Stadium at Rotary Field will be the venue where the Pecos High School Eagles play their home football games. In addition to the new field, the complex will feature bright lights suitable for outdoor night-time play and a very large central entry plaza. The field will be utilized for soccer, track and field, band practices as well as various other events and celebrations.

According to the Odessa American, in the summer of 2021 the old Eagle Stadium was declared not structurally sound, and thus the fall football season there had to be scrapped. The ISD’s board of education approved a budget of $17.5 million that autumn for the renovation, and the project broke ground in the first part of 2022.

As designed by VLK Architects, the new Eagle Stadium will feature concession stands, seating for both visitors and home fans, as well as a state-of-the-art press box. The redesigned stadium will also feature new turf and a track that has been totally resurfaced.

VLK Architects is working in conjunction with BTC Construction for the next era of Eagle Stadium at Rotary Field.

According to the Odessa American, the old stadium had a seating capacity of 5,000, but the redesigned facility will only be able to seat 4,000.

“We are excited to bring a new, dynamic stadium to PBTISD that will be the envy of other districts across West Texas,” Brent Jaco, Superintendent of PBTISD, said in a recent statement about the athletic field and stadium. “Though the former structure is gone, the land remains…this land has been the site of athletic events for over 90 years in the community. So, the memories will always remain for everyone that comes through PBTISD.”

Added Monika Castillo, AIA, Principal of VLK Architects: “VLK Architects is excited to be a part of this project that will impact so many people in the PBTISD community. This is the second construction project across the district, and it has been an honor to continue our relationship with PBTISD.”

The project is scheduled to be completed in August.

VLK Architects has its main offices in Houston and Fort Worth. In addition to the work at the Pecos-Barstow-Toyah Independent School District, VLK’s other educational projects in the Lone Star State include Marine Creek Middle School and Cheney Hills Elementary School.

Pecos-Barstow-Toyah ISD began in 1883 as a single schoolhouse located along the Pecos River. The district now serves more than 2,600 students across five campuses.