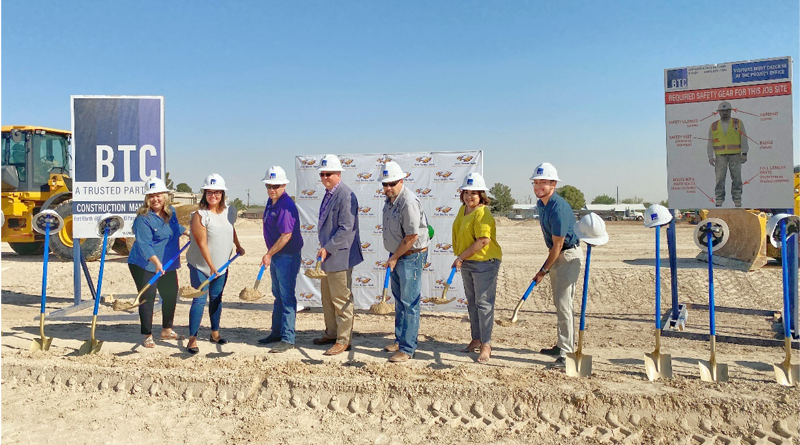 Personnel from VLK were joined at the site by members of the Pecos-Barstow-Toyah ISD as well as workers from the general contractor BTC. Photo Credit: VLK Architects Inc.

PECOS, Tex.—VLK Architects, which operates out of several offices in the Lone Star State, recently was on hand for a ceremonial groundbreaking at what will be a new elementary school for the Pecos-Barstow-Toyah Independent School District.  Personnel from VLK were joined at the site by members of the Pecos-Barstow-Toyah ISD as well as workers from the general contractor BTC, known for its work on Texas school projects.

In its design, the architecture firm applied its patented VLK | LAUNCH process to streamline the project.  When completed, the 133,038-square-foot educational building will feature a two-story library as its centerpiece, offering learning areas and reading nooks on both levels.  The new elementary school will also boast a music room and adjoining performance space, science laboratories that connect to outdoor areas, and an art room that features a working kiln.  The building will focus on what is known as STREAM education, which stands for science, technology, reading, English, arts and math.

“VLK feels very fortunate for the partnership that we have established with Pecos-Barstow-Toyah ISD and their community as they break ground on their second elementary school,” Monika Castillo, principal of VLK Architects, said in a recent release from the architecture firm.  “We understand the legacy these projects will bring to the students and staff and are excited to be a part of it.”

Also speaking at the ceremony, PBTISD Superintendent Brent Jaco discussed the collaboration with VLK and BTC—as well as ensuring that the new school will be a benefit to not just the district but also the community at large.

“We have worked to ensure district stakeholders had a voice in the design of the new schools and facilities,” Jaco said.  “Community members, parents, teachers, campus administrators, and even students have been involved beginning almost a year ago.”

The school, projected to be ready to welcome students come the fall of 2023, is the second elementary facility that VLK designed for the district as a part of a funding package that was approved by voters in May 2021.

General contractor BTC is returning to working at PBTISD, where the company earlier collaborated with VLK on the Maintenance | Child Nutrition | Technology | DAEP Campus Facility, which was also paid four thanks to the district’s $178.6-million bond passed in 2021.  BTC’s other work at PBTISD has entailed Pecos High School Phase 1, consisting of the CTE and Science Wing, as well as transforming Austin Elementary into an adult learning center.

Pecos-Barstow-Toyah ISD has been in existence since 1883.  The West Texas district now entails nearly 3,000 students across its five campuses.