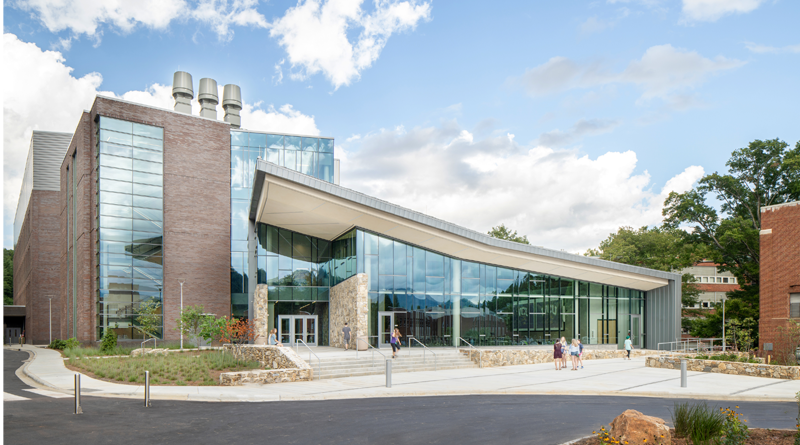 CULLOWHEE, N.C.—International builder Skanska, based in Sweden, has finished up work on a new science education building at Western Carolina University in Cullowhee.

The five-level Apodaca building will be home to Western Carolina’s departments of biology, chemistry and physics, as well as the school’s interdisciplinary program in forensic science. The facility also hosts a global information system laboratory, forensic anthropology lab, computational lab as well as various support offices and labs. The building also entails a rooftop greenhouse and terrace, allowing for additional training and experimental space effectively as a sixth floor. Apodada also hosts a steam micro-plant that replaced an older steam plant the university had been using.

The building was named for onetime North Carolina state senator Thomas M. Apodaca, known for his service to the western part of the Tarheel State as well as his support for Western Carolina University. Sen. Apodaca’s advocacy entailed pushing for the Connect NC bond referendum, which allocated funds for Western Carolina as well as other educational projects in the region. He graduated from Western Carolina in 1980 and currently serves on the school’s board of trustees.

Skanska worked in conjunction with architect Lord Aeck Sargent of Chapel Hill and AEI Engineering, also of Chapel Hill, and who served as the project engineer.

“It was a privilege to work with Western Carolina University on this new STEM building offering superior learning opportunities for the students and staff at the university,” Greg Peele, executive vice president responsible for Skanska’s North Carolina and Virginia building operations, said in a recent statement. “The building’s technological advancements and innovative features will help prepare students for future careers in health care, high-tech manufacturing, natural product development and more.”

Added David Kinner, dean of the College of Arts and Sciences at Western Carolina:

“This Apodaca Science Building serves many of our WCU students, as those from across campus will come here to study diverse topics—from the magnificence of our universe to the complexity of a human body. Hopefully, students also begin to understand the scientific process, the steady and continued work of asking and answering questions, and comprehend the ability of science to provide important information and breakthroughs for society.”

Skanska’s U.S. operations are based out of New York. The firm generated $6.4 billion in revenue in 2021 alone.