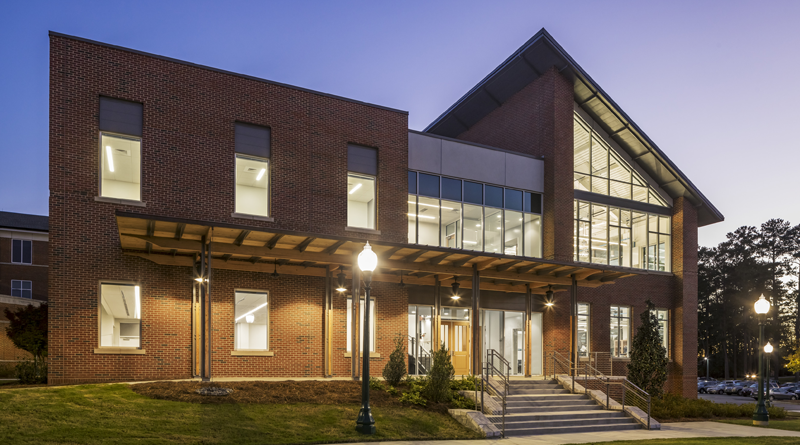 The $13 million, 26,500-square-foot animal studies department will offer the latest in scientific technology and focus on such disciplines as genetics, microbiology and physiology. Cross-disciplinary collaboration will be key to the research conducted in the Animal Science complex.

Natural light entering the building via larger-than-usual windows allows for easier wayfinding as well as lessens the need for artificial illumination. Furthermore, the design features exposed circulation and mechanical systems, thereby encouraging students to see an externalization of the holistic approach of biological studies.

On the exterior, the building’s skin features brick with metal panels and articulated fenestrations, meant to lend the structure an agrarian vibe. This also allows the Animal Science building to more seamlessly blend in with the existing McAllister Hall motif. Cooper Carry’s architectural flourishes include a two-story horse leg-inspired column on the facility’s exterior, which is made of stainless steel plates, laminated timber and cable to represent the musculoskeletal structures of the creature. Similarly, various canopies and porches in the building are meant to evoke various other skeletal features of animals that might be studied.

Tim Fish, principal at Cooper’s Carry’s Higher Education Studio, said in a statement that his company’s job was to “put interaction and collaboration at the heart of our design strategy.”

In a subsequent comment to School Construction News, Fish expanded on this notion and touched upon the importance of sunlight “illuminating” the process of scientific inquiry and discovery.

“Lab spaces and classrooms have an abundance of natural, carefully placed windows from corridors to lab and classroom spaces,” Fish remarked, “helping to further diffuse the light while putting science on display.”

“The animal science major has been a nationally recognized, top-performing program for many years,” Berry College President Steve Briggs recently noted. “We are excited to see how our students will work with faculty in the laboratories and specialized teaching areas to prepare for careers and leadership roles in animal-related industries. We know that great spaces inspire great performances.”

Although Berry College only has 2,100 students, its campus, at 27,000 acres, is in fact the largest of any institution of higher learning in the world.