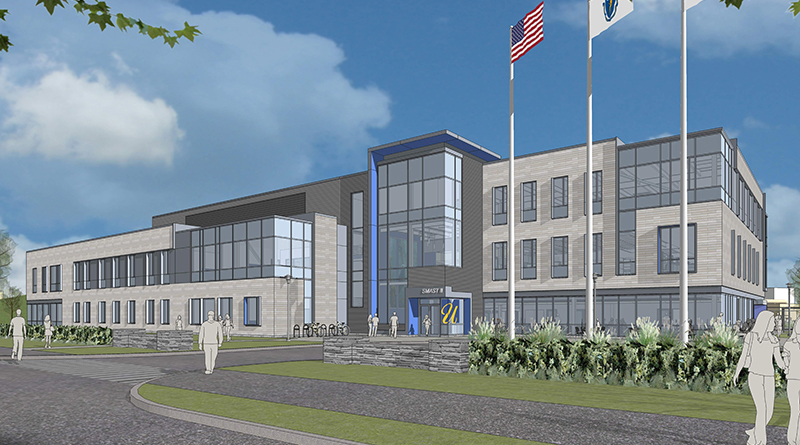 NEW BEDFORD, Mass. — The $55 million, 76,000-square-foot expansion of the University of Massachusetts Dartmouth School for Marine Science and Technology (SMAST), a 2016 Project to Watch, reached a major construction milestone on Sept. 26. The university officially celebrated the facility’s topping out in a celebration attended by students, faculty, staff and state and local officials.

The expanded SMAST, the largest marine science program in the UMass system, is being built in collaboration with the state Division of Marine Fisheries (DMF) to create a major marine science hub in the nation’s top fishing port, according to a statement by the university.

The new facility will join a 35,0000-square-foot SMAST facility on Clark’s Cove in New Bedford, and will bring more than 150 faculty, students and staff together to engage in education, research and policy related to commercial fishing, coastal preservation, ocean observation and climate change.

“Seeing the steel of this building, we are reminded of the strong, unyielding, enduring commitment that UMass Dartmouth and our School for Marine Science and Technology are making to this the community, the Commonwealth and the planet,” interim UMass Dartmouth Chancellor Peyton R. Helm said in a statement at the ceremony. “The work that will go on within these walls will help sustain fisheries, protect the fragile coastal environment and confront issues related to climate change. There is no better place for this facility and these brilliant scientists to be.”

Coastal and marine-related activities are critical to the economy and quality of life for the Commonwealth, according to a statement by the university. The combined economic impact of the coastal and marine economies of Massachusetts has been estimated to exceed $130 billion and directly employs more than 1.3 million people.

“I look forward to the day when this building is full with scientists, researchers and students all working together to advance marine technology and our local economy,” said Senate Assistant Majority Leader and Rules Chairman Mark C. Montigny, D-New Bedford, who led the legislative effort for state funding and authored the 2008 state bond bill providing $25 million to the project, in a statement.

The facility will include a new 76,000-square-foot building with state-of-the-art laboratory facilities, high bay area and a seawater research facility, as well as select renovations to the existing SMAST facility next door. The project includes space for the DMF and dive gear program to be accommodated in both buildings.

Work began on the facility in October 2015 and is expected to wrap up in the next year.