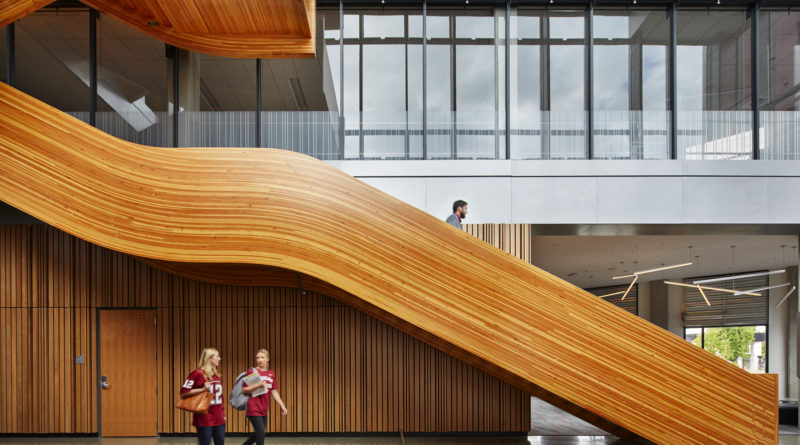 The new academic building will serve as an engineering and STEM facility, and achieved LEED Gold certification for raising the bar for sustainability in higher-education projects. Photo Credit (all): Ben Benschneider Photography

SRG Partnership was the architect on the project, with Hoffman Construction serving as the general contractor; both companies have offices in Seattle. McKinstry (also of Seattle) was the engineering firm on the project and was responsible for implementing the energy and water conservation measures into the 95,000-square-foot facility. The project had a budget of $65 million, and the building was completed in May 2017 after three years of construction.

With many of the degree programs at this campus focused on engineering and STEM, it was important for that to be reflected in the buildings standards. The facility is equipped with a living laboratory that will provide a real-world learning environment, giving students in the region the skills they need to compete in local and global economies.

The Innovation Forum is the heart of the building as a four-story atrium that links major entry points for students and provides access to the full range of activities within.The Forum also serves as a pre-function space and a gathering place for university and community events.

“Like an interior street, the Forum is fronted by key student support elements with multiple ‘storefronts’ for student services, a tiered lecture hall, a media-rich classroom and the Capstone Studio — an upper-division lab providing students and industry partners a place for invention and innovation,” said Tim Richey, project lead and senior associate at SRG Partnership.

In total, there are 13 classrooms and nine engineering labs. To the west of the Forum, faculty offices and conference rooms surround a central, light-filled triangular atrium, which provides a place for faculty interaction.

The design team sought to set a high standard for energy performance with the design of the new Everett University Center, and it will now serve as a baseline for future campus development, according to Richey. The thermal envelope far exceeds the state energy code standards, using a rain-screen façade of brick and a metal panel with R-35 insulation and thermally broken cladding supports. A full-building air leakage test revealed a combined average of 0.217 cfm/ft2 at 75 Pa, which is 45 percent better than the Washington State Energy Code, according to Richey.

Additionally, a low-energy VRF system conditions the classroom and faculty wings. The central Innovation Forum of the facility incorporates mechanically operable windows and louvers, providing fresh air ventilation and natural cooling. During winter months, heat energy is harvested from the building’s data center and reused in the Forum’s hydronic radiant floor. A 75 kW array of photovoltaic panels at the roof is dramatically exposed as the building’s cornice, cantilevering beyond the south façade.

Below the Capstone Studio is a 20,000-gallon cistern that captures rainwater and repurposes it for 100 percent of the toilet and urinal flushing demand between September and June, diverting the surplus to site irrigation. The new facility also boasts a complete LED lighting package. The LEED certification application for the facility is still in process, with certification expected for sometime in 2018.

“One of the unique aspects of the new Washington State University Center is that it’s the first building of what promises to be an extensive branch campus in the future,” said Richey. “Rather than comparing it to projects that have been completed in the past, this building is setting the standard in design character and performance for future campus development that is sure to follow.”