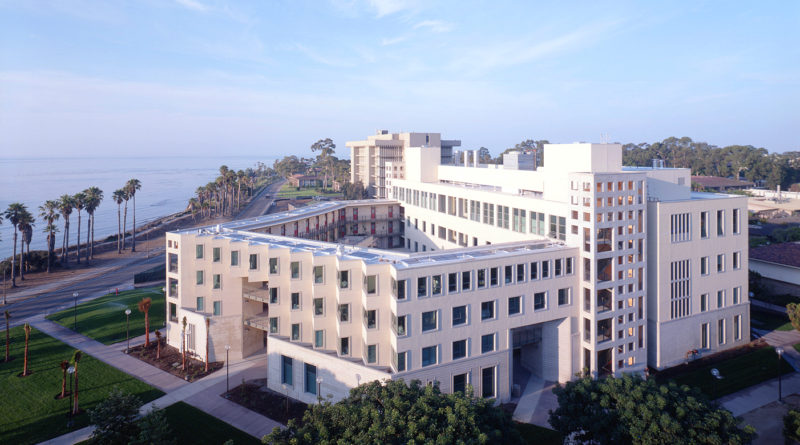 While this third certification is a clear delineation of the “greenness” of the building, Bren Hall was already recognized as the nation’s “greenest laboratory building” just after its initial construction was completed in 2002 due to its energy-efficient design, and was the first laboratory building in the country to receive LEED Platinum certification for new buildings.

The list of what makes Bren Hall so green is lengthy. Some of the many features that stand out include natural ventilation — Bren Hall was sited to take advantage of ocean breezes. Offices have operable windows and transoms, so no air-conditioning is required. Heaters in the offices automatically shut off when windows are opened. In addition, Bren Hall is connected to a multi-building chilled water loop on campus to provide cost-effective cooling to the laboratory wing. The Bren chiller is able to take on a portion of the total campus load. The shared system saves as much as 85 percent runtime on the chiller.

Bren Hall also has low-impact restrooms with low-flow fixtures throughout the building. Toilets on the first floor use reclaimed water, and automatic flush valves are used on all toilets. Automatic valves are used on all bathroom sinks. Each of the 10 waterless urinals saves approximately 40,000 gallons of water per year, according to UCSB’s list of sustainable features on the website. White cap roofing is used to reduce “heat island” effect, and large windows are used throughout the building to reduce the need for electricity for lighting. The lighting plan incorporates energy-efficient fixtures and bulbs with daylighting controls for motion, heat and ambient light.

The list of sustainable features of the three-times-Platinum laboratory goes on, and so does the list of awards and honors that the building has earned. In addition to the three LEED Platinum certifications, Bren Hall earned the Flex Your Power Energy Efficiency Award in February 2004 and the International Interior Design Association Environmental Award in May 2003. Bren Hall was the featured site for the Parade of Green Buildings in April 2003 and won the Goleta Valley Beautiful Award in November 2002.

Amongst the organizations that awarded honors to UCSB in 2017 — in addition to the USGBC’s latest Platinum certification — are the Princeton Review, the Association for the Advancement of Sustainability in Higher Education and the National Recycling Coalition.