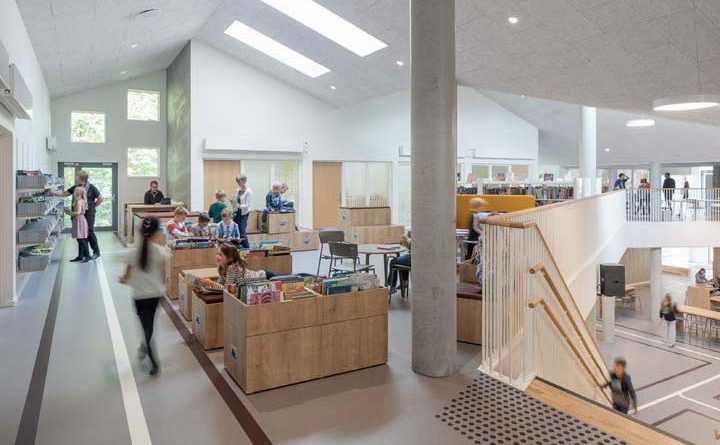 ODDER, Denmark — If there is such a place as Heaven, it was likely designed by the Danes. For some that might be blasphemous, but for those who are fans of contemporary, clean design, nobody does it better than the Danish.

And they start them young over there in the land of Hamlet and Legos — behold the Skovbakke School in Odder, west of Copenhagen in Denmark, designed by architects CEBRA. The primary school accommodates 650 students and 100 children at an adjacent daycare facility. Its footprint finds four structures that join in a large commons with three connected plazas, each boasting an individual theme — science, creativity and athletics.

As for the third theme, the designers put an emphasis on outdoor play and exercise as well as safety. The school’s fire access routes and common areas also serve as running tracks for athletic fitness. Moreover, each classroom boasts an area specifically for physical activity.

To provide a variety of settings for socializing, the interior is fashioned to evoke the nature of opposites. Ergo, ceiling lines oscillate between high and low reaches and lighting is arranged in a dynamic manner so there are bright spaces and comparatively dimmer areas as well. There is also a signature timber staircase and geometrically arrayed skylights to let in as much natural light as possible during Denmark’s short, dark winter days.

Getting Hygge With It

“It’s sort of tailored to the use of the space. So, if I’m in a classroom, what’s my comfort level? Is there plenty of light? Is it warm in winter? Is it cool and protected in summer?” said Michael Frazzetto, senior associate with Melbourne-based Six Degrees Architects, who shared his observations about the school with Australia’s Domain Media.

In many ways, the effect CEBRA is trying to achieve is summed in the Danish idiom-turned-meme “hygge,” which is loosely defined as a kind of cozy contentment. The school’s intimate spaces and preoccupation with managing light as part of a greater social mechanism align with hygge as underscored by the Danish predilection for “interiority, contrast and atmosphere,” wrote author Louisa Thomsen Brits in her tome “The Book of Hygee.”