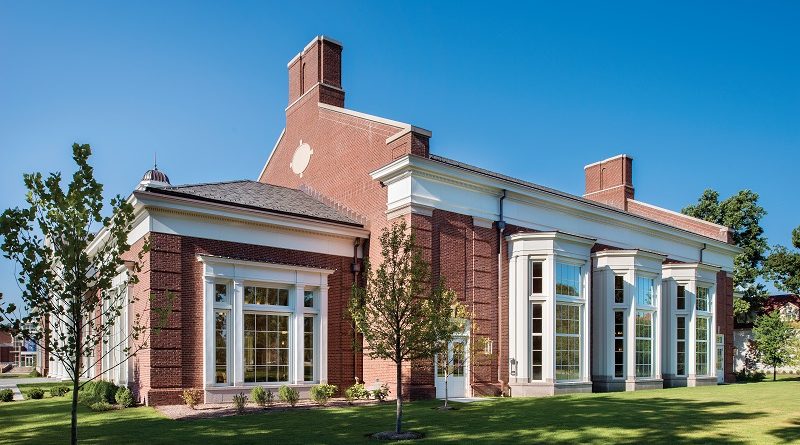 GREENCASTLE, Ind. — For 175 years, DePauw University has offered a quality academic experience in a small-scale residential setting. The recently completed Hoover Hall fulfills a core element of the university’s Campus Master Plan, which called for the transformation of the campus core into a place of greater connection, contemplation and creativity.

Hoover Hall serves as the primary dining space for first-year students and upper-class students living in university housing. Its new 48,600-square-foot facility (as of October 2016) seats more than 600 students in the main dining room, with dozens more accommodated in an array of smaller dining rooms. Here, faculty and students have the opportunity to extend classrooms lessons over mealtime discussions.

Q: What were the major design elements involved in the project?

Foley: DePauw’s new dining hall maintains a traditional exterior, but its interior shifts from dated cafeteria lines in favor of exhibition-style cooking with a menu of foods from around the world. Designed in the Georgian style, popular between 1720 and 1830, it features steep-angled slate roofs with copper accents, hand-molded red brick, Indiana limestone and painted trim that blend with the rest of the campus.

DePauw University’s Hoover Hall is designed in a restrained Georgian style, referencing the adjacent Memorial Student Union, as well as Asbury Hall and Harrison Hall, academic buildings located to the north. It was important to carry forward this design language through the details. Important aesthetic details for the windows include simulated divided lites, decorative brick mold trims and custom color matching to the trim of the adjacent buildings. Most importantly, the windows in Hoover Hall are very large, so that the activity within the building is visible and transparent from the surrounding quad and serves to draw students into the building. Not only was Kolbe Windows & Doors able to produce both the windows and exterior doors so that both components were complementary, they were able to produce the extremely large windows that our design required.

Q: What did you learn from the project?

Harrison: The architect wanted really large windows for this project, so we got Kolbe involved. What I like about Kolbe is that they don’t say “no” right away; they look into it and see what’s possible. I really enjoyed working with Kolbe’s John Fenn and the Architectural Support team. They helped us find the right option that would meet the architect’s design. Kolbe’s team recommended a custom Ultra Series Majesta Double Hung Transom to match the look and sizes envisioned by RAMSA. Many of the windows’ frame dimensions span 85 by 118 inches.

Morris: One of the more challenging aspects for us with the windows was perfecting the curved units that flank the main entrance. On the flat sash windows, simulated divided lites were specified and worked fine. On the curved units, simulated just weren’t possible, so Kolbe was able to modify their traditional design to match the desired look.

Harrison: At first, the radius was too sharp to produce. Kolbe kept making adjustments until they arrived at the right size and curvature that met the architect’s expectations. We actually ended up making these curved, flanking windows with PDLs [performance divided lites.] They’re almost exactly like the flat sash windows. The only difference is that curved glass cannot have grilles in the airspace. It was fun to see what Kolbe can do.

Morris: Way up front, Kolbe was identified as a preferred vendor by RAMSA. Through the early discussions about the project, it was clear that they were the best choice for matching the architectural theme and needs for the building. Once the system was specified, we worked to create the detailed shop drawings and sample review to ensure the project’s constructability. It took several months to make sure each opening would be right, so that when the crew arrived on site everything would install as quickly and smoothly as possible. From the perimeter fence to the wall of the building, we only had 20 feet. Every maneuver had to be planned. Given the size of the windows and confines of the site, that effort upfront made a difference.

Q: What was unique about this project that perhaps differed from projects that you’ve completed in the past?

Harrison: Kolbe offers several extruded aluminum brickmould options, but the architect wanted something unlike any of these and drew a custom profile. RAMSA and Kolbe were extremely detailed in working together to make changes down to 1/16 inch to perfect it. The same custom brickmould used on Hoover Hall was used next door on the Memorial Student Union Building. The Union also relied on Kolbe’s Ultra Series doors and Majesta windows to update its façade and match the new dining hall. The units not only have the same brickmould, they also have the same PDLs, glass and finish. Kolbe also prepared all the doors with EPT (electric power transfer) to assist with their automation and installation. They routed grooves in the wood before the aluminum exteriors were applied to make the electrical connections as easy as possible.

Foley: The project was designed to target a LEED Gold certification. A high-performing exterior envelope was key to achieving this.