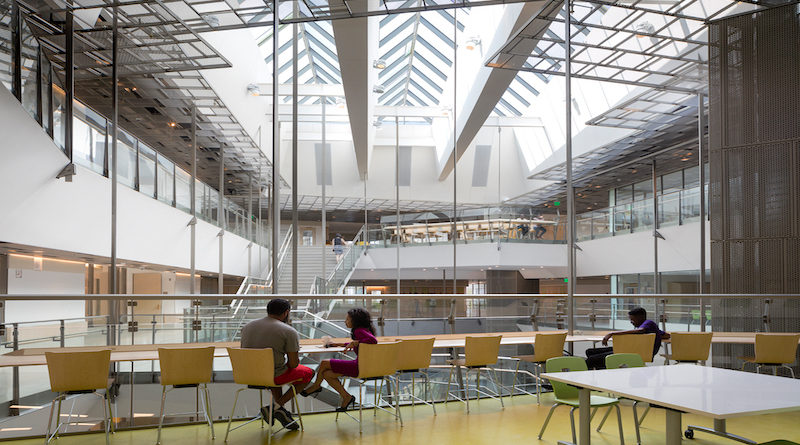 The state-of-the-art, 128,000-square-foot facility is located just outside of Dudley Square in Roxbury, and features flexible indoor and outdoor learning spaces, two fabrication labs also known as “fab labs,” modern technology such as 3D printers and laser die cutters, a gymnasium, a dance studio, a media center, an abundance of natural light with views of the downtown Boston skyline from several classrooms and sophisticated green energy systems.

“This magnificent school — and the powerful educational work that will happen within it — truly demonstrates to our students that the Boston Public Schools cares about them, and that we believe they have what it takes to succeed in the innovation economy,” said BPS Interim Superintendent Laura Perille. “Today’s celebration represents years of thoughtful collaboration with local and state government, and many community organizations and partners. I could not be more excited.”

The building was designed by the firm Jonathan Levi Architects of Boston and built by Gilbane, Inc. in partnership with Janey Construction Management. The design and construction of the project was managed by the City of Boston Public Facilities Department in collaboration with Daedalus Project Managers.

The $73 million facility was the first new school construction project in the Boston Public Schools in 15 years, and is seen as a model for future projects through the BuildBPS educational and facilities master plan. About $37 million of the total cost was reimbursed by the Massachusetts School Building Authority (MSBA).

The design of the new school is based upon the project-based learning curriculum. The academic spaces are organized by cohort, which includes educational classrooms, science laboratories, special education instructional space, and shared amenities. The school was built to serve 600 BPS students by 2020. Currently, 488 students are enrolled as the school begins to expand.

Since 2014, Mayor Walsh and BPS have secured more than $110 million in MSBA funds to support new school buildings and facility renovations, which includes $30 million from the MSBA Accelerated Repair Program to fund for new boilers, windows, and roofs in school buildings across the city.

“I am thrilled to open the Dearborn STEM Academy and continue the trend of new beginnings in the City of Boston,” said Mayor Walsh. “Students, teachers, and families are excited for all the possibilities the new year brings. And we, as a City, are making historic investments in our youth and our communities. I can’t wait to see this school grow, and know that Dearborn students are going to do remarkable things in their new home.”

Located at 36 Winthrop Street in Roxbury, the new Dearborn STEM Academy is at the same location of the Henry Dearborn School, which was built in 1913 when it opened as the High School of Practical Arts. At the time, the school taught classes in cooking, laundry, sewing, nursing, and home economics for young women. The school was closed and re-opened in 1954 as Girls’ High School. It operated as Roxbury High School from 1974-1981, and it was designated the Henry Dearborn School in 1981. Since 2014, Dearborn STEM Academy has operated in a shared space with the Jeremiah E. Burke High School in Dorchester while the current building was under construction.