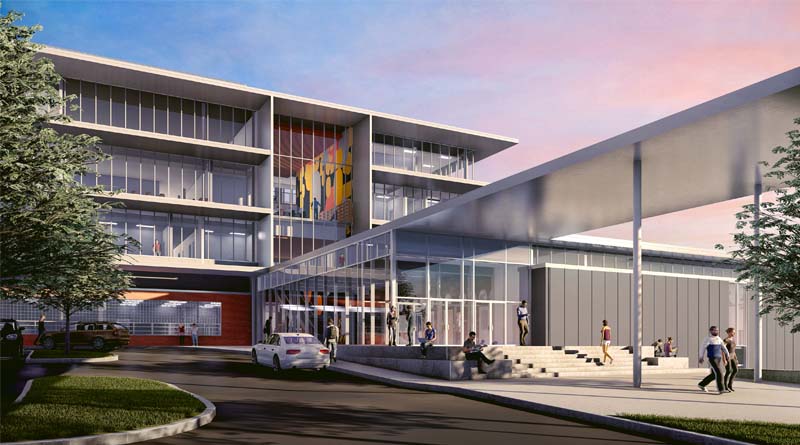 AUSTIN, Texas—Recently released renderings of the new $80 million Eastside Memorial Early College High School and International High School in Austin, Texas show the strong intention to honor and preserve the of L.C. Anderson High School, which previously occupied the site and served as an important community center in the area for decades.

In 2017, architecture firm Perkins and Will was chosen to design the project by the Austin Independent School Board. The district’s first ground-up school to be built in nearly two decades, it will be located at 900 Thompson Street on grounds that are part of what was the last campus of L.C. Anderson High School, the segregation-era African American school that was a source of neighborhood pride and community.

L.C. Anderson High School had at least three different locations in the area before closing in 1971, when integration of public schools was federally mandated.

The new Eastside Memorial Early College High School and International High School—which was approved by Austin voters as part of the Austin ISD 2017 Bond program—will highlight the original L.C. Anderson High School’s rich history by honoring the past and providing students with pathways to the future through a strong vision of academic excellence, multiculturalism and community connectivity.

“The comprehensive facility will offer a STEM-focused curriculum featuring health science and environmental science, and will provide specialized education for students who are new to the country and have little to no proficiency in English,” said Angela Whitaker-Williams, Austin Practice Leader, Principal, at Perkins and Will.

The new, four-story portion of the building will feature technologically equipped learning spaces, as well as student-focused classrooms, two gymnasiums, and a premiere health science lab. The team also plans to build on the school’s multiple outdoor spaces with a large, multi-use classroom courtyard that includes dining areas, a stage, reflection areas and sensory gardens.

To capture the legacy of this important community hub and source of neighborhood pride, substantial elements of the original structure will be reconstructed and incorporated in the design scheme for the new school.

Reconstructed areas will reuse the salvaged red brick and original 1950s modern forms. The entrance to the former location of the gym will become a new community center entrance with a gallery that tells the histories of L.C. Anderson High School to future generations.

“This branded gallery will include a timeline of the former school’s history, legacy medallions and display cabinets for objects of historic significance,” said Whitaker-Williams.

“To distinguish itself in the present—while relating to the past—similar horizontal proportions and modern lines are achieved by using predominantly metal and glass building materials. The success stories of today’s students will be told in the entry hall on an ever-changing digital display, in the display cases of victory trophies and in a timeline of the story of Eastside and International in the main hall. The modernized Eastside Memorial ECHS and International High School at the Original L.C. Anderson campus is where legacy meets the future.”

Aiming for LEED Silver Certification, Perkins and Will designed the space as a learning lab of environmental science featuring rain gardens and overhangs calculated for daylight and heat gain reductions.

“This design will work to minimize the facility’s carbon footprint within the community by making use of passive heating and cooling with strategic design elements, using natural daylighting, optimizing mechanical systems, reducing water usage within the building and on-site, and capitalizing on its proximity to public transportation and bicycle routes,” she explained.

“The original facility had serious structural issues, so we aimed to preserve original materials and rebuild parts of the building, including its original, mid-century entrance, band hall, choir room, and one classroom wing,” Whitaker-Williams added.

The biggest design challenge on this was project was reconstructing the desired areas from the 1950s-era structure, while also serving Austin ISD’s very modern and innovative academic goals.

“This collaborative and diverse stakeholder process envisioned strategies to honor the past, the present and the future in order to respect the history of the site, serve the needs of current students, and prepare students for life beyond high school.”

The campus is directly across the street from the Austin Community College Eastview campus, which improves access for students working concurrently on their associate degree and high school diploma.

The completion date for the school is slated for summer 2021.