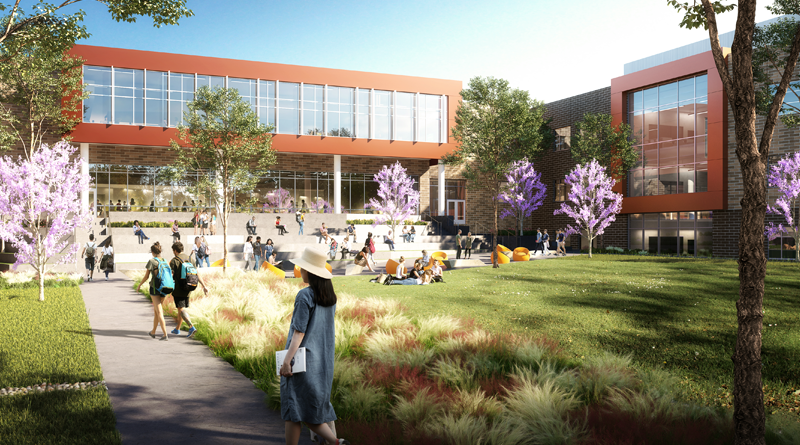 The new Felton Grove High School in North Carolina is aiming to open in August 2025 with a capacity of 2,223 students. Photo Credit: RATIO Architects and Wake County Public School System

As students file out of classrooms for summer break, school campuses will become the epicenter for an abundance of seasonal construction projects. This summer the projects are likely to be large. School officials were recently notified that the federal government has now made another $500 million grant program available to school campuses. This most recent funding was allocated to address infrastructure needs, and because it is another addition to the multimillions already allocated for school districts, the results should be rather incredible.

Infrastructure modernization includes all types of projects – energy upgrades, technology implementations, campus security, cybersecurity, and even new facilities. Ultimately, the projects should improve safety, lower operational costs, facilitate additional classrooms, upgrade labs, enhance gymnasiums or sports facilities, and provide the technology required to foster the curiosity and intellectual development of future generations. Some have ventured to say that current funding for school districts, from a multitude of different sources, represents a historic high point and the projects that result will change lives and restructure entire communities throughout the U.S.

In the city of Toledo, Iowa, officials at the state, municipal, and district levels will collaborate on a $26.8 million effort to relocate the South Tama Middle School. The project’s objective is to facilitate adaptive re-use of the state-owned Iowa Juvenile Home facility. It has been vacant since 2014 and its renovation includes an expansion to accommodate the district’s needs. The remediation and subsequent demolition phases will go out to bid later this year.

A multi-phase plan to renew facilities across Michigan’s Holland Public School District is already underway. Voters approved a $74 million bond proposal that includes funding for remodeling both Holland Middle School and Holland High School. Numerous areas that will be upgraded as a part of the renovation include cafeterias, common areas, and outdoor spaces. Another $41.4 million is available for the second planned phase of work, which will include partial reconstruction of two elementary schools in the district.

Officials in the Lincoln County School District of Missouri budgeted $37 million for renovation, expansion, and new construction work across the district’s various school campuses. To address growth, an eighth elementary school will be constructed. The Troy South Middle School campus also will be expanded to accommodate six additional classrooms. Finally, funding is allocated for a remodel of the New Horizons High School facility. That project will not only expand the high school’s programming capacity but will also enhance its security resources.

Ohio’s Manchester School District is coordinating with state planning officials for a $34 million investment in school improvement projects. Additional oversight and funding from the Ohio Facilities Construction Commission will support the launch of a district-wide sequence of school improvement projects. A new high school will be constructed, an existing facility will be renovated and restructured as an elementary school, and two other educational facilities will be demolished. Renovation work on the existing high school building will take place at about the same time. All projects are scheduled for completion by the end of summer 2024.

In Fulton County, Georgia, a five-year sales tax will generate an estimated total of $860 million which will be used for upcoming school projects. The funding will be used for projects outlined in the school district’s master plan. A few of the projects include preliminary planning to replace the district’s aging North Spring High School facility, a roof replacement for a middle school, and a major renovation of a charter school in the district.

The Wake County Public School System in North Carolina plans to direct $274.4 million in funding to construction of new school facilities and an additional $92.2 million for major renovations to existing facilities. Over half of the sum designated for renovation work is committed to North Garner Middle School. That project will have a $52.1 million funding allocation to expand the school’s classroom capacity, construct a new running track, and make other improvements. Additionally, $60 million is earmarked for construction of the county’s new Pleasant Plains Elementary School. A similar funding allocation will be used for construction of the county’s new Bowling Road Elementary School. Design work is underway for a longer-term project to build a new $152.3 million Felton Grove High School to open in August 2025 with a capacity of 2,223 students.

The city of Burlington, Vermont, is in the preliminary design stage of a plan to construct a new high school facility. Local school officials are reviewing five different design plans — all of which have estimated costs in the range of $200 million. A $29 million demolition and environmental remediation phase will clear the site of the existing structures before construction of the new facility begins.

School district campuses are highly valued public assets. There is little disagreement about the importance educational resources. Students at every educational level represent the country’s future scientists, engineers, researchers, technology professionals, physicians, and elected officials. The upgrades, modernizations, and enhancements that will be possible because of the funding will result in thousands of collaborative initiatives that will in turn create jobs, stimulate regional economies, and build stronger communities.

Mary Scott Nabers is president and CEO of Strategic Partnerships Inc., a business development company specializing in government contracting and procurement consulting throughout the U.S. Her recently released book, Inside the Infrastructure Revolution: A Roadmap for Building America, is a handbook for contractors, investors and the public at large seeking to explore how public-private partnerships or joint ventures can help finance their infrastructure projects.