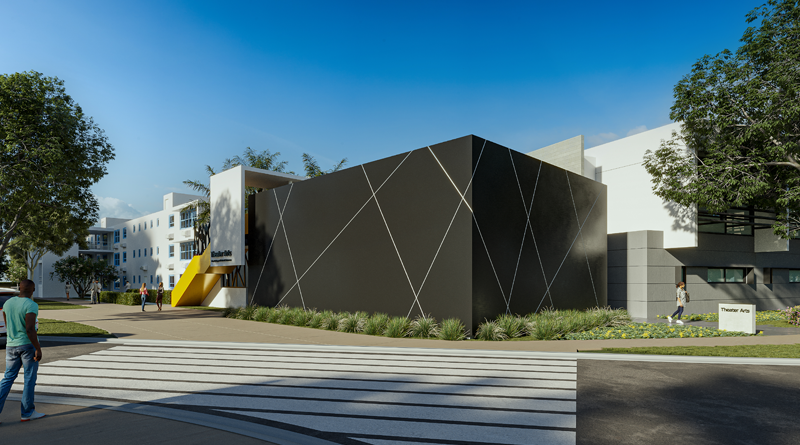 The 15,000-square-foot venue is aiming for completion in the summer of 2023. Photo Credit: MATEU Architecture

MIAMI—General contracting and construction management firm ANF Group, which is based in Davie, Fla., has been hired to work on a new theater arts building for the University of Miami (Fla.), which will be located at the school’s Coral Gables campus.

The 15,000-square-foot complex, designed by Mateu Architecture of Miami, will encompass two stories. In addition to the theater performance space itself, the new building will feature areas for concessions, wardrobe and dressing rooms, classrooms, student lounge, as well as various support and administration spaces. The design also calls for a 1,000-square-foot IT hub and data room to be built.

“We are very excited to have been selected to build the new Theater Arts building at UM, [which is] such a vibrant and diverse academic institution in the South Florida community,” Al Fernandez, president of ANF Group, said in a recent news release about his company’s working on the school theater. “We are honored to be working with one of America’s top universities on this extraordinary project.”

In an additional statement to School Construction News, Erick Cervantes, ANF Group’s assistant project manager, said that his firm faces the task of not disturbing the students and teachers who will continue to be milling about the campus on a daily basis during the construction of the new theater arts complex.

“Our team calls it the ‘good neighbor’ approach,” Cervantes said. “Working around class schedules, keeping noise to a minimum, and having minimal presence on campus is all part of our effort to be as least disruptive as possible. It’s rewarding to know that we are building a project that will have a positive impact on hundreds of students, professors, and educators for years to come.”

The University of Miami, which is an entirely private college, hosts over 17,000 students, with some 5,000 being educated at the Coral Gables campus alone. The college has a dozen schools for both its undergraduate and graduate students pursuing specialties in well over 300 various disciplines.

ANF Group, which was founded in 1981, has performed other educational construction work in the Sunshine State that includes the $50 million Nova Southeastern University Center for Collaborative Research Facility in Davie, Florida. The firm provides services in such specialties as preconstruction, construction management, general contracting, development, and design-build services throughout South Florida.

The theater project at the University of Miami’s Coral Gables campus is now in the preconstruction phase. It is anticipated to get underway this fall, with a projected completion date sometime in the summer of 2023.