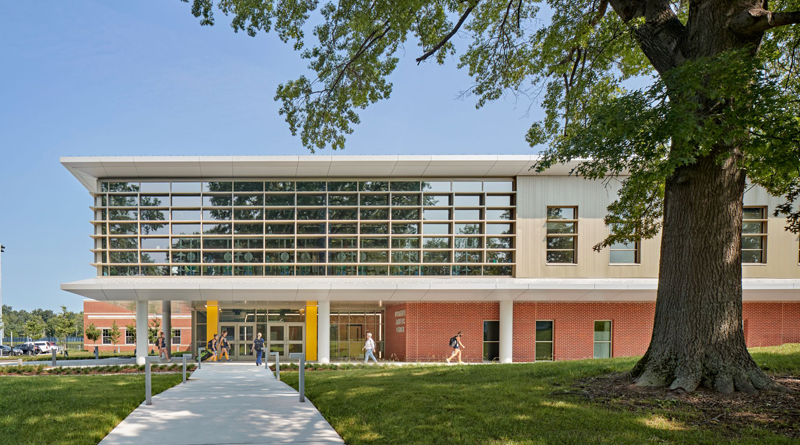 WEST HARTFORD, Conn.—The New England-based design firm JCJ Architecture has renovated and expanded the on-campus athletic center at the University of Saint Joseph. JCJ’s mandate was to modernize the facility for an increasing student body and accommodate the school’s expanding athletics.

The new areas of the athletic facility encompass 31,277 square feet of space and are meant to provide a warm atmosphere to visitors and students alike. Part of the redesign entails melding the red brick colonial motif of the original building with more modern elements. Accordingly, the red brick materials will be married to new yellow doorways, and the athletic facility will also feature cantilevers, modern glass elements and “projections.”

One of the main new additions at the athletic facility was an NCAA regulation-size basketball court. The court will double as a gathering and performance space when not in use for games and practices. The facility’s main lobby will offer concessions and ticket-purchase areas, as well as lounging seating for students and visitors. Furthermore, the suite for the student health services, which used to reside in another nearby building, is now located on the ground floor of the new building.

Because the athletic center is adjacent to the Student Center, it represents a kind of central hub for student activity at Saint Joseph. The school had been an all-women’s college—until 2018, when it became co-educational. The school at that point increased its number and variety of sports, which thus required a renovation to the athletic center for such expanded sports activities.

Working alongside JCJ Architecture was general contractor O&G Industries, which is also based in Connecticut.

“Helping USJ to advance its institutional goals and seeing the way students, administrators and faculty have embraced the building has been truly rewarding,” Jim LaPosta, principal and chief architectural officer at JCJ Architecture, said in a statement emailed to School Construction News. “It’s been a great experience to see how the new space became a hub of campus activity.”

Added LaPosta: “Because it was a relatively modest addition to an existing building, each space had to support a range of student needs including varsity athletics, recreation, academics, and social gathering.

“We’ve been told that visits to the new Student Health Center have increased due to its new and more accessible location within the O’Connell Center, while the lobby seating has become a much-used social and study drop-in spot for students.”

Among JCJ Architecture’s professional affiliations in the educational sphere are the American Institute of Architecture, the Society of College and University Planners, the Association for Learning Environments and the National Intramural and Recreational Sports Association.

The University of Saint Joseph has just over 2,000 students in a variety of programs of study. It was first founded as a private Catholic university in 1932.