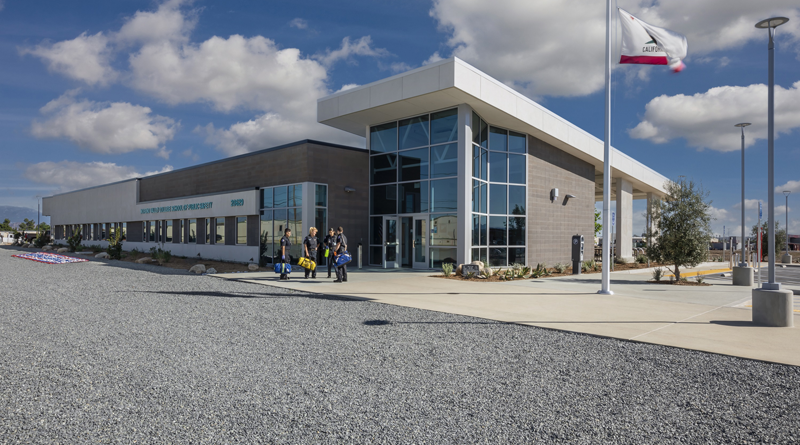 The new training center will be one of the largest public safety educational facilities in Southern California. Photo Credit: RMA Architectural Photography

RIVERSIDE, Calif.—Designer SVA Architects of Santa Ana joined officials from Moreno Valley College in nearby Riverside County for the recent opening of the new Ben Clark Training Center, located on the college’s campus. SVA worked alongside general contractor CW Driver to ensure that the educational building would be up and running for Moreno Valley College in a timely manner.

The $13 million Ben Clark Training Center will be one of the largest public safety educational facilities in Southern California. The building, located 11 miles from the main campus in the city of Riverside, was partially funded by Measure C, a bond measure that was approved by voters in 2004. Inside, the single-story structure contains 14,135 square feet of educational space entailing not only classrooms but administrative offices. Additionally, the center will host training laboratories for such Moreno Valley College programs as justice administration, fire technology, homeland security and EMT courses.

The center is named in honor of Riverside County’s former sheriff, who served the community for 36 years, 23 of them as sheriff, before retiring in 1986. Sheriff Ben Clark, who passed away in 2005, saw to it that a statewide safety training protocol was implemented for peace officers throughout the Golden State. Clark also successfully lobbied state legislators in Sacramento to fund better training opportunities for law enforcement.

Regarding the opening of the training facility, SVA Architects President Robert Simons said it was an honor to work with Moreno Valley College to design spaces for the training of future public safety officers.

“It’s so rewarding to be a part of a project that helps fulfill this vital role in our communities,” Simons said.

In a subsequent statement emailed to School Construction News, Simons added that working under a tight budget and timeline was a problem that he and his construction partners had to contend with in order to fashion the flexible learning spaces called for by the college.

“As always, it was important to deliver all of the program needs, as the goal is to design and build the next phase,” he said. “The most rewarding aspect of the project was the people! The Moreno Valley community college and Riverside Community college folks were engaged, very generous with their time and really terrific to collaborate with.”

SVA Architects was founded in 2003, and since that time has gone on to specialize in urban planning and mixed-use projects. In addition to its headquarters in Orange County, the firm’s additional California offices include Oakland, San Diego and Davis; they also have a satellite location in Honolulu.